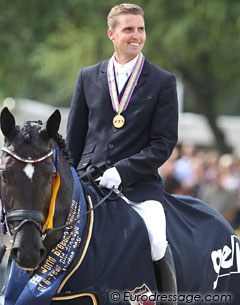 The Danish dominance in the 6-year old finals was one of the most striking facts at the 2010 World Young Horse Championships in Verden. Three out of four Danish horses made it straight into the finals (so 75% of the Danish qualificants were finallists) including a fourth Danish owned and ridden Rebelle, who got a wild card for Germany because the chestnut mare is Oldenburg bred.

Bold Judges Send Out a Message 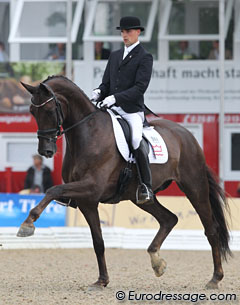 Helgstrand and Driver pulled out all the stops to erase the little errors they had in the qualification round in order to go for another gold medal. The Danish Olympian powered his horse round the ring in the most amazing trot, which was not always regular. Driver lost his balance in the voltes, was very collected in the corners and had a jittery right hock in the extensions. Nevertheless the medium and extended trot were world class. The extended walk had tons of overtrack and activity. The big liver chestnut gelding lost the clarity of rhythm in the medium walk despite the fact that the walk pirouettes were super. In canter the horse showed much scope in each stride, but Helgstrand rode a half pass right in the turn towards the right counter canter. The flying changes were ok, but the second one was crooked in the body. Even though Driver was more uphill in the frame than in the team test, Helgstrand was regulating the entire ride with his hands. There should have been more lightness in the contact with the bit, even though controling the sheer power and magnitude of a horse like Driver must be quite an undertaking. 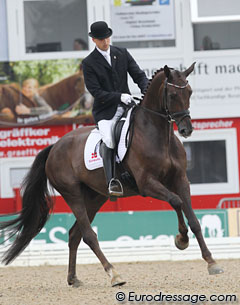 After each ride Judge Angelica Fromming took the microphone to explain their assessment. With Honnerups Driver they carefully weighed their words. "This is a horse with a lot of potential, which we can see in the medium and extended trot and extended canter," said Fromming. "But the collection was a little exaggerated. The basic trot was really good but there were too many passagey steps before the medium trot." The trot scored 8.9. The walk they liked for the "clear rhythm in the extended walk, but there was a tiny bit of a lack of ground cover and he lost the rhythm between the pirouettes." This gait scored only 6.3. Though the canter was powerful, they saw that today the horse "got wide behind in the collected canter, which means that he was too collected." The canter scored 7.9. For submission, Helgstrand got another 7.9. They said that the current problems of today "are easy to solve as this is a horse with a lot of potential. Finally the horse got 8.0 for general impression and the judges panel summarized the major problem as "exaggerated collection" in the test.

The crowds were in shock with this strict verdict which in fact was a clear message from the panel of judges that they dislike to see 6-year old horses ridden as Grand Prix horses in the show ring. Some people applauded the judges' decisions, others booed. It certainly was the most controversial and thought provoking assessment in the 6-year old Finals. 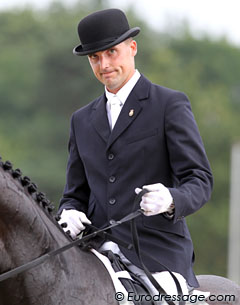 At the press conference after the prize giving ceremony Andreas Helgstrand was not afraid to speak up about his ride on Driver and the points he received for it. The Dane thought he had delivered the gold medal winning round on the horse, sticking up his arms in celebration of his test after he saluted, but he ended up 12th with 7.8 and left the ring shocked while the judges were explaining their scores on the microphone.

At the press conference Helgstrand said, "Driver did a super good job. I know the judges thought I was riding too collected. I think I rode around in the same speed as last year. Today they gave a seven-something for canter, yesterday we got 9.8 and the canter was not so different." Helgstrand also mentioned the force a powerhouse horse like Driver has. "I always have to pull him down because he has so much power, but today they thought my riding was wrong. I wasn't that happy." Andreas admitted that the bad score affected his confidence for his test on Uno Donna Unique: " I was very insecure of what the judges would like to see." Helgstrand, nevertheless, believes in the quality of Driver. "You can always find bad things in a horse. For me he was the best horse I have ever had." 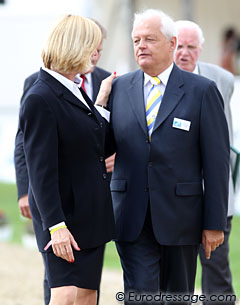 Polish judge Markowski clarified the judging further at the press conference.  "We have to keep a balance between the good things and what is not good," said Markowski. "I agree it's a wonderful horse and with some training all these small problems will be solved. We have to bring to the attention that some trot is too collected, similar to passage. For the walk the mark was low, the extended walk was fine but in the medium walk he was pacing, which shows some kind of tension. In the future this will be solved." When asked why the difference in points was so great between the preliminary and finals test, Markowski replied, "The test today is more difficult, more transitions to collected canter. Especially on the short side we saw that the horse is not ready for this type of collection because he got wide behind. That's why we are stronger with the points than on the first day."

Helgstrand stayed positive about the future of Honnerups Driver. "I know he's an extra, extraordinary horse. Both horses will now relax a little bit and then we keep training. We have the Danish Young Horse Championships in October. Driver is very tense and spooky so he needs to come out more, but they don't need much more because they are quite good and in shape. I have time enough. I look forward to the future and hope they will be fit." 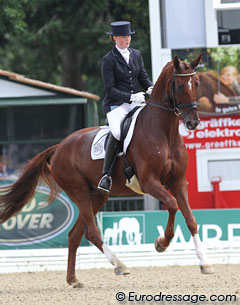 The 2007 Oldenburg Elite Mare Champion Rebelle (by Don Schufro x Regazzoni), bred and owned by Blue Hors Stud in Randboel, Denmark,  finished fourth. Under Blue Horse rider Maria Anita Andersen, the chestnut mare excelled in the canter work performing the four best flying changes of all horses. In the trot work she could have been a bit more flexible in the poll and she was a bit rushed in the half pass left and a bit phelgmatic in the half pass right. The walk had two hooves overstep.

The judges recommended the pair on its flying changes and solid canter work  (9.0), but wanted to see more swing in the back in the trot (8.3). The walk was good but needed "more freedom in the shoulder" (7.6). For submission the striking mare, who has had one foal so far, scored 8.4 because "there was hardly any bending seen in the lateral movements." With 8.8 for general impression, Rebelle totaled 8.42 and slotted in fourth.