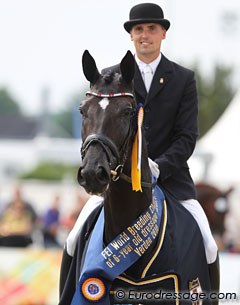 Andreas Helgstrand and the Danish warmblood mare Uno Donna Unique won the 6-year old Finals at the 2010 World Championships for Young Dressage Horses. Scoring 9.46 the black mare (by Don Schufro x Falkland) was more than 0.80 ahead of silver medal winning Soliere under Eva Möller. The German rider added an extra medal to her collection this year with another bronze on Blickpunkt.

Donna Unique's breeders and owners Joan Andreasen and Søren Melgaard of Stuteri UNO were over the moon with the victory, especially because last year the mare won silver at the World Championships, but was not even allowed in the show ring for the prize giving ceremony as rider Andreas Helgstrand got the gold on Honnerups Driver. This time Andreasen and Melgaard got their moment of glory as their gold medal was wildly celebrated in the lavish prize giving ceremony and later on amongst the hordes of Danes which came down to Verden to watch the Finals. The Danish Warmblood society brought huge crates of champagne to the warm up ring and bottles were popped one after the other as of people dressed in the red Dansk Varmblod t-shirts were offered a glass. Furthermore rumour has it that Blue Hors stud manager Esben Möller offered free breedings to Don Schufro for Donna Unique's dam the rest of her life.

Helgstrand's ride was brilliant. Even though the black mare entered the ring drenched in sweat, she was fresh, powerful and energetic throughout the test. The super cadence in the traversal movements, the spring and suspension in trot and the power in the extensions were fantastic. The extended walk was lovely as well as both walk pirouettes. The canter work was high quality but the mare got a little tense before the changes. They all went well, even though Donna Unique visibly showed her anticipation. 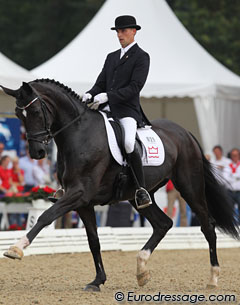 The judging panel consisted of Mrs Fromming (GER), Mrs Max-Theurer (AUT), Mr Markowski (POL) and Mrs Loriston-Clarke (GBR). They started their public commentary with the "the trot was excellent so we gave it a 10." The judges also appreciated the overtrack and relaxation in medium and extended walk (9.5) as well as the "good spring" in canter. "The counter canter was better than the extended canter," Fromming said. "From a side view the extended canter is enormous but from C you see it was crooked" (9.3). Because Donna Unique was slightly tilted in the half pass left and was tense before the flying changes, the submission scored 8.9. With another 9.6 for general impression, Helgstrand and Donna Unique averaged 9.46.

"Donna is always doing her best and thinking forward," Helgstrand said in praise of his mare. "For me she's a very good competition horse; she has no weaknesses. It's been a bit difficult with the changes because she got hot and used to ran away. The changes are still very green. But the way she can do the trot work! She always thinks up and in front of you."

Silver and Bronze for Soliere and Blickpunkt 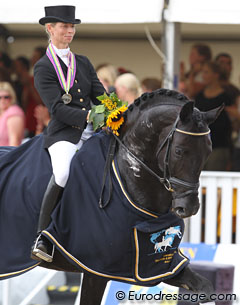 Interestingly the medallists of last year's 5-year old division were the same this year in the 6-year old finals; only Andreas had to swap in silver with Eva Moller as the German rider won silver with Soliere and bronze with Blickpunkt.

The judging in the 6-year olds finals was on the dot this year and the panel deserves recognition for their excellent job. The scoring started out strictly with conservative notes (mainly 7s) for the first starters in the field and fortunately the panel upheld the same tight standard throughout the class, as they are supposed to. Only with Donna Unique they went really high, maybe creating too big of difference between the other medal winners. With the silver medal winning Soliere they were slightly generous as well because the black Hanoverian stallion (by Sandro Hit x Weltmeyer) was definitely not better in overall quality than the other top ranked horses. Soliere must have earned his high points on his lovely round under Eva in which the four flying changes were superb. 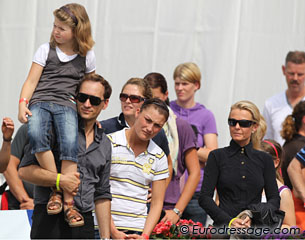 Owned by Natasha van Dyk (renowned DJ Paul van Dyk's wife), Soliere is a heavy black stallion with quick activity from behind but he lacks understep. He got wide behind in the extended trot and came behind the vertical in the volte left. The extended walk was fantastic with good overtrack and active strides though both walk pirouettes were a bit big. The canter work is nice and uphill but could use some more self carriage. The four changes were good though the third was slightly croupe high.

The judges liked the canter very well and scored it a 9.0. For the trot they gave 8.2 and the walk 8.0. "He was very obedient in the changes even though we thought the second one was bit flat," Fromming explained when she said the submission earned him 8.8. With another 8.5 for general impression, Soliere ended up with 8.66 and the silver medal.

Back to Bronze for Blickpunkt 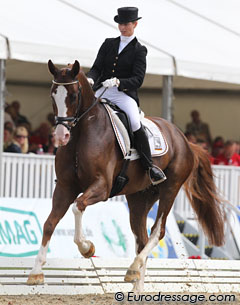 Silvia Rizzo's Westfalian gelding Blickpunkt (by Belissimo M x Weltmeyer) won his second bronze medal at a World Championships for Young Dressage Horses. Not too shabby for a horse that has hardly been shown throughout the year.

The chestnut gelding started out with super smooth trot work in which the cadence and tempo were very well regulated. There was a hesitation in the shoulder in left, but the half passes had good swing and crossing of the legs. Blickpunkt tracked over well in the extended walk but could have been a bit more relaxed. At all times the poll was the highest point. In canter, the gelding had good self carriage but the flying changes looked green. The first and third change were super but the second was in two phases.

The judges praised the horse's willingness to work and its super engagement. "He is expressive and has good ability to collect." The trot earned 8.6, the walk, which was "especially good between the two pirouettes," got 8.8. The judges wanted to see a bit more flexion in the hocks in canter, even though it was uphill and balanced (8.4). With 8.2 for submission and 8.7 for general impression, Blickpunkt finished third on 8.54.

"I've been riding both horses since they are three," said Möller at the press conference. "My husband (Dr. Ulf Möller) bought them both as a foal. You see them growing up, break them in, then you come here. It's a really good feeling to win a medal."