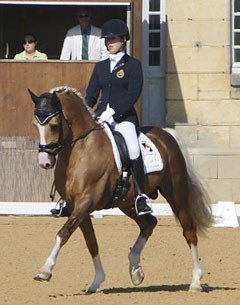 Belgian FEI pony team rider Alexa Fairchild made a clean sweep at the CDI-P Pompadour on 1-4 July, winning all three rounds in the FEI pony division.

Set in the Limousin area in France, the Pompadour international dressage event turned out to be the ideal location for Alexa to gain momentum in her run towards the 2010 European Pony Championships in Bishop Burton, UK, on 28 July - 1 August 2010.

Fairchild and her loyal partner of two years, Stukhuster Ricardo Go For Gold, pulled a hat trick winning all three rounds with seventy plus percentage scores and fending off all competition in a league of her own. The pair started their string of success with a winning score of 70,463% in the team test, followed by an impressive 73,421% in the individual test and a massive 76,500% in the Kur to Music.

"Ricardo felt calm, relaxed and was focused on my aids," Fairchild told Eurodressage about her rides in Pompadour. "During the test I had a nice feeling because he was concentrated and I was able to apply more pressure and ask for more."

Danish Frederik Larnaes placed second with Lukas in the team test with 67,685% whereas Estelle Wettstein became Fairchild's main rival in the individual test as well the kur. The Swiss rode her 20-year old dark bay stallion twice to a second place with 69,912% and 73,417%. 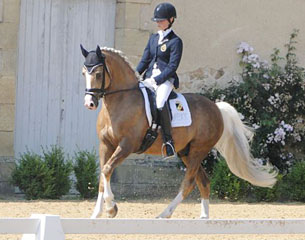 Fairchild's excellent performance at Pompadour was proof of her soaring rise to the top which started at the 2010 CDI Compiègne one month ago. With her 11-year old German licensed stallion (by Anjershof Rocky x Valentino) Fairchild finished second in the individual (69,474%) and kur (74,750%) twice placing behind Dutch duo Dana van Lierop and Wengelo's Ricardo. This Dutch winner's duo unfortunately dissolved after Compiegne as the dark bay stallion sold to Germany.

With her courage and confidence in the show ring climbing to new heights, Fairchild is well prepared for the 2010 European Pony Championships in three weeks time. "In Compiegne I was more stressed and less focused going into the arena, whereas in Pompadour the pressure didn't affect me," she admitted. "I was focused on doing a good job in the ring." 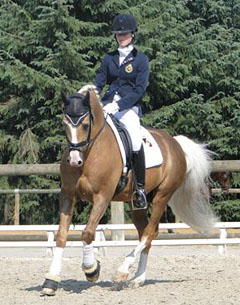 After Pompadour her palomino stallion got a short break and then Alexa picked up the reins again for team building with the other Belgian pony team riders. "Last Friday a clinic stage was organised with judge Jacques van Daele to improve areas of our test riding," she said.

This year's Europeans will be the last for 15-year old Alexa, who is born in New York to American parents Stephen and Erin. Trained by Virginie Deltour and living in Brussels, Alexa will be making the transition to junior rider's level in 2011 with her new horse Totall Tip Top, a 10-year old Dutch warmblood gelding by Metall. "I am completely in love with my horse," she said. "I enjoy riding him very much and he has already taught me a lot."

Alexa's pony days come to a finish after the Belgian Championships in August. "I hope for a medal to end my career in ponies," said the ambitious rider.