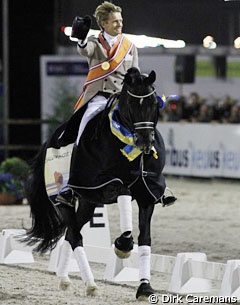 Edward Gal and Totilas prolonged their Grand Prix Champion's title at the 2010 Dutch Dressage Championships held in De Steeg, The Netherlands, June 11 - 13, 2010. With no other A-team riders attending the national championships, Gal freewheeled to victory and left all competition leagues behind him.

The shows competition rules were bent on purpose this year allowing A-team riders only to compete in two of the usual three rounds of the event. With the CDIO Rotterdam as a Dutch WEG selection trial next week, the De Steeg organizers saw all crowd attracting riders pull out of their show, which prompted the Dutch Equestrian Federation to change its rules for the occasion. In the end, only Edward Gal showed up. No sight of Adelinde Cornelissen, Imke Schellekens Bartels, Hans Peter Minderhoud nor Anky van Grunsven (not even with Painted Black). Fortunately the coming of Totilas brightened the lacklustre 2010 Dutch Grand Prix Championships, where the main excitement was to be found in the thriller competitions at youth riders and small tour level. 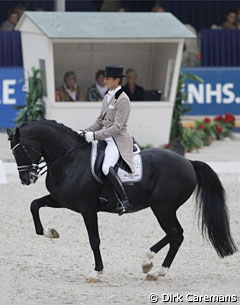 This year's Grand Prix championship consisted of two rounds: the Special and the Kur, whereas the Grand Prix served as qualifier for the Special. Gal won the Special with 78,208% though the ride was not totally error free. Not all piaffe-passage transitions were as smooth and the exit from the first pirouette was difficult. Gal beat himself on Sisther de Jeu (by Gribaldi), finishing second with 72.666%. Marlies van Baalen surprisingly finished third with her upcoming Grand Prix mare Phoebe (by Regazzoni) and fourth with her experienced Ojay (by Jazz).

"Normally the Special is the second test in a competition but now it was the first one. My horse had to get used to that," said Gal. "There was a lot of noise outside the ring and Totilas reacted much to it. I couldn't ride him really relaxed because I continuously had to control him."

In the Kur to music Gal and Totilas were on the same wavelength and remained error-free. The judges scored the test 88.150% which turned the 40-year old Harskamp based rider into the 2010 Dutch Grand Prix champion. His overall score was 22% more than silver medallist Marlies van Baalen on Ojay. This combination ranked third in the freestyle with 73.700%. Bart Veeze and Stefano (by Gribaldi) were the surprise shooting stars of the event. They slotted in second in the Kur with 73.950%, but overall got bronze.

"Maybe the piaffe and passage were a bit normal in the Grand Prix Special but in the Kur we were able to execute them with much expression," Van Baalen commented after her ride. "I'm very happy with the silver medal and I didn't want to endanger that position by riding Phoebe in the freestyle. Ojay is a bit more safe and I was second in the provisional ranking. I wanted to keep that spot." 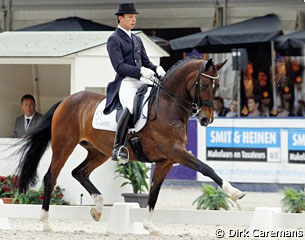 Bart Veeze stunned himself by winning the bronze. "I had hoped to rank in the top twelve and ride the kur, but finishing third is just fantastic," Veeze commented. Judge Wim Ernes was thrilled about Veeze's performance. "This combination was the revelation of the Championship. His horse has much expression in the Grand Prix movements. Furthermore Bart rides with guts and took a lot of risk, not afraid to lose his podium spot.

Veeze was one of the very few riders who performed a freestyle of high technical difficulty. He rode two tempi's on the circle followed by ones on the diagonal. "I once saw Isabell Werth do that and it was really nice, so I thought to myself: let's try that," Veeze admitted. "The first time it went great and the second time in the ones I had a mistake, but it was my own fault because I was late with my aids." 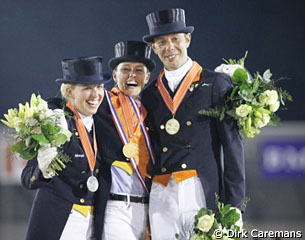 Madeleine Witte-Vrees and the liver chestnut KWPN bred Vontango (by Contango x Jazz) won the gold medal in the small tour championship. Vontago, who has an extreme amount of knee action, was second in the Prix St Georges (73.859%) and won the Intermediaire I (73.245%) as well as the Kur to Music (76.750%).

"The nicest thing of it all is that my husband, who makes a living of selling horses, is not allowed to sell this one because he promised me when he proposed for marriage," Witte-Vrees said. "Vontango will never be sold and I'll keep him to that promise."

Riding the freestyle was a challenge as the arena surroundings were so noisy that few riders could actually hear their music. Witte-Vrees had no problems with that and rode a test with much energy. "My horse always gives a full 100 percent and if he has to do his best for ten days, he'll do his best each day and will still do his best even on the 11th," said Madeleine.

Joyce Heuitink and her gorgeous dark bay stallion Wup (by Welt Hit II) won the silver medal. They won the Prix St Georges (74.122%) but were third in the Intermediaire I (71.140%) and fourth in the freestyle (74.416%). Hans Peter Minderhoud and the bay gelding Ridderkerk (by Kennedy) slotted in third overall and captured bronze.

"I've only been riding Ridderkerk since January," said Minderhoud. "We did our first show in April. I never expected to finish on the podium so this is a total surprise to me. Now we're going to work on the piaffe and passage so I can prepare him for the big tour." 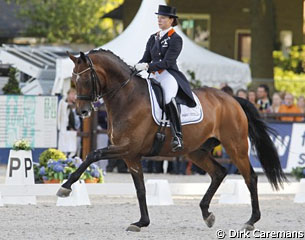 Angela Krooswijk and Revino II were the unbeatable pair in the Dutch Young Riders Championships. She won all three rounds with solid seventy percentage scores, outclassing all competition and grabbing the gold with a 9% point advantage to silver medal winning Danielle van Mierlo on the black Ucento. Michelle van Lanen and the Jazz-copy Urchin B ranked third to get the bronze.

Krooswijk saddled two horses for the championships: her initial number one horse, Rhinelander stallion Roman Nature (by Rohdiamant) and her second choice, 14-year old Revino II (by Rohdiamant x Contender). In the end Revino II proved to be the reliable one scoring gold.

"Everybody thought Roman Nature would go for the title, but a stallion can be very hormonal and then there's nowhere to go with him. So I put my money on Revino II and that worked out fine," explained Krooswijk."

Tineke Bartels, chef d'equipe of the Dutch Young Riders, was extremely pleased with the performances of her teens in De Steeg. "These girls really know how to ride a horse and the top four in the ranking have all become reliable and solid combinations with which we can do something at the European Championships," said Bartels. 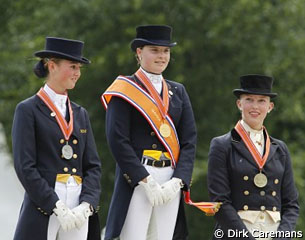 Anne Meulendijks and her massive black stallion Ohio became the 2010 Dutch Junior Riders Champion, though the battle was an extremely tough with a different winner in each of the three competition rounds. Meulendijks won the team championship test (70.594%), but finished third in the individual test (67.736%) and second in the Kur (72.700). Her overall score was still almost three percent more than silver medallist and kur winner Danielle Houtvast on Rambo. Newcomer Stephanie Kooijman and her long legged black gelding Winston (by OO Seven) took home the bronze.

Kooijman had to deal with extreme weather conditions in her kur. Wind blew away all decorations round the arena and plants ended up in the ring. Unphased Kooijman continued her test on the 7-year old Winston head jury Ineke Janssen rang the bell and stopped the ride. All plants were removed and Kooijman was asked to start over again, which she did with much concentration.

"Stephanie proved that she can keep her cool," said junior chef d'equipe Tineke Bartels. "She makes a wonderful combination with her young Winston, which is progressing tremendously."

Champion Anne Meulendijks is only 16 years old and has been riding Grand Prix schoolmaster Ohio (by Indoctro) for two months. "I totally did not expect this," said Meulendijks, who is trained by Tommie Visser. "I have a super nice horse and am over the moon."

Silver medallist Danielle Houtvast won the Kur aboard the 12-year old black KWPN gelding Rambo (by Gribaldi x Amor). Houtvast was a former Dutch pony team rider and is now aiming for a professional career in horses. She is following the Master Class riding courses in Deurne, The Netherlands, and works at Leida Collins-Strijk's stable in Riethoven.

Big absentee in the junior riders division was last year's bronze medallist Sanne van Grotel on Melvin (by Flemmingh). Melvin is injured and had to be withdrawn.