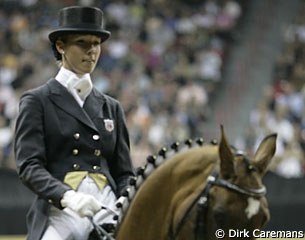 The store can be found at http://stores.ebay.com/Courtney-King-Dye-Medical-Fund and features a variety of items donated by individuals in the equestrian community. 100% of the net proceeds from sales of all items at this store will go to the Courtney King-Dye Medical Fund.

King-Dye, a top dressage rider who competed for the US team in the 2008 Olympics in Hong Kong, suffered a serious head injury March 3, while schooling one of her horses in Loxahatchee, FL. She remains in a coma.

Items that have been donated to the eBay store to date include: an oil painting ("Summer Piaffe") by award winning artist Ivetta Harte, Templeton Thompson- autographed CDs, dressage DVDs, a breeding to Holsteiner stallion Contester II, Jeanne Lambrecht bracelets, EquestrianProfessional.com memberships, and an Exquisite Equestrian Custom Wool Blanket. Individuals interested in donating items to the store should email Lyndsey White at lwhite@freedomhealthllc.com or call Freedom Health, the makers of SUCCEED, at 330-562-0888.

"We felt the need to do something above and beyond our sponsorship of Courtney to help her during this difficult time" said John Hall, President of Freedom Health. "No matter what your preferred equestrian discipline, at times like this we must all band together and show our support."