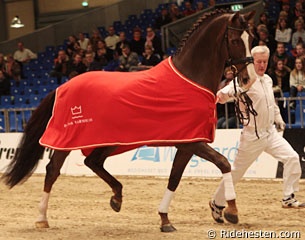 “The Stallion of the Year has already had so much influence that it seems as if he has been around forever. At many occasions has he placed Danish horse breeding on the world map, and he is the first Dansk Warmblood stallion to have the whole of Europe as his working area.”

These were the words by spokes person of the breeding committee Poul Graugaard as he opened his presentation of the Stallion of the Year 2010, the 11 year old Blue Hors Don Romantic by Blue Hors Don Schufro / Blue Hors Romancier / Mago xx, bred by Jens Aage Buhl and owned by Kjeld Kirk Kristiansen’s Blue Hors ApS.

This dark chestnut stallion was born to win. He became Foal of the Year in Dansk Varmblod in 1999 and sold at auction for a record breaking price. At the age of 3 he became champion colt in Herning and won the performance test that year earning 10 for both canter and rideability.

The following year he became the undisputed licensing champion and decorated with the much-coveted and rarely awarded gold medal. He went on to win the Danish dressage championships as a 4 year old before a severe injury put an end to his career.

The frisky stallion showed high spirit when he was awarded the challenge trophy as well as a painted portrait, and received standing ovations from the audience.

Back to the 2010 DWB Licensing index