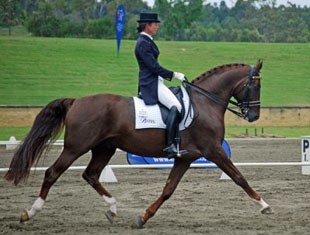 Olympic riders Rachael Sanna, Heath Ryan and 2009 Australian Dressage Champion Brett Parbery will be amongst the line-up of elite riders for the four days of competition.

's-Hertogenbosch (NED) in March 2010. Saturday night’s Grand Prix Freestyle determines the winner. Expect a battle of epic proportions between Brett Parbery on Victory Salute, Heath Ryan on last year’s winner Regardez Moi and Rachael Sanna on Jaybee Alabaster who missed out on competing at the National Dressage Championships in October and will be out make her mark heading towards the World Equestrian Games (WEG) next year.

The festival will also host the first-ever international Para-Equestrian event. The CPEDI-3* will serve as the only opportunity in the Southern Hemisphere for Para-Equestrian athletes to qualify for WEG.

Another of the main attractions is the Aachen Challenge. 34 riders aged between 16-25 years will ride in the first round (Prix St Georges level) on Saturday with the top 3 qualifying for Sunday’s final and the chance to win the sensational prize – a trip to Aachen CDIO in 2010.

For the lovers of Young Horse classes you will be treated to the 4 and 5-year-old classes on Sunday.

350 horses have been entered over the four-days of competition so there will plenty to see. With Christmas around the corner take advantage of the shopping village or simply bring the family for a day out.