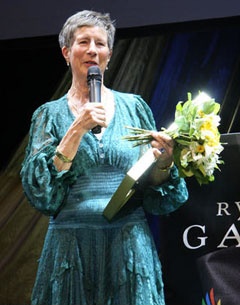 This annual gala ball has become the social highlight for Swedish equestrianism.

This year the gala did not take place in January but was held co-inciding with the 2009 CDI-W/CSI-W Stockholm. For the fourth time Swedish riders, breeders and horses were put in the spotlight.

More prizes went to Lovsta Stutteri. The 6-year old Swedish warmblood gelding Paridon Magi was proclaimed talent of the year. This gelding is by Don Primero x Napeleon and is bred by Niclas Magnusson. He is owned by Antonio Axson Johnson, who is owner of Lovsta Stutteri and sponsor of Tinne Vilhelmson. Under Caroline Palmgren, Paridon Magi won the 2009 Swedish Young Horse Championships for 6-year olds.

"I want to thank Tinne and Antonia for getting the opportunity to ride him," Palmgren commented. "This is really a beautiful day."

Swedish Horse of the Year was the show jumper Saint Amour (by Stakkatox Sherlock Holmes). He beat Kittel's Scandic in the running for the title. Patrik Kittel's groom, however, Marie Johansson was named groom of the year.

Grand Prix rider and dressage sponsor Ulla Hakanson (73) was given an Honourary Award. "I came here to hand out awards, not to receive them," Hakanson joked.

Check out the complete list of award recipients (in Swedish)
Check out a great photo gallery of the Gala at Hippson.se