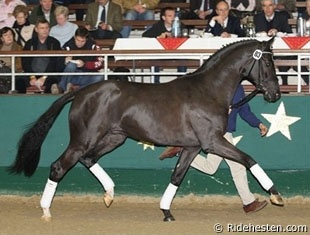 The Westfalian society probably had the highest quality collection of 2,5 year old colts at their stallion licensing in all Germany. The super moving Silbermond was proclaimed champion of the 2009 Westfalian Stallion Licensing

Silbermond is a black Sir Donnerhall x Ramiro's Son x Matcho AA offspring, bred by Doris Hagemann and owned by Martin Dieckhoff. He will be standing at stud at Stallion Station Holkenbrink in Münster-Albachten. The black is a super elegant, long legged, refined stallion with a powerful, engaged and quick hind leg. 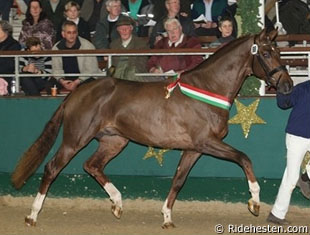 The Dutch bred Vitalis (by Vivaldi x D-Day x Argus) became reserve champion of the licensing. This liver chestnut stallion is bred by Mr. de Crom in Weert, The Netherlands, and owned by Willeke Bos and Eugene Reesink. Under the name of Capriool, this colt sold in 2007 as a foal for 16,000 euro at the SELL foal auction. He has now been leased to the Westfalian State Stud in Warendorf, where he will be available to breeders.

The best show jumper of this year's collection was Cristallo II (by Cornet Obolensky x Cassini I). His full brother Cristallo I presented his first crop of colts, which proved to be of outstanding quality.

Forty-one stallions got licensed in Munster out of which 14 became premium stallions. The best selling stallion at auction was the show jumper by Untouchable x Capitol I x Caletto II. He sold for 300,000 euro to the Dutch syndicate consisting of Jan Vink, Joop van Uytert, Ad Valk and Joop Aaldering.