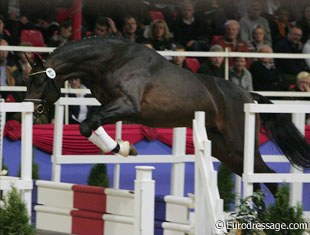 The second day of the Oldenburg Stallion Licensing comprises the jumping in freedom.

The stallions are presented in hand in trot, their conformation is briefly inspected again and the colts are then turned loose to move in freedom first before the are guided to the jumps.

As free jumping was on the program for today. I got up at 7.30h for breakfast before we went to the center. There was a huge queue of cars trying to park at 9 am but we cut corners and got ourselves a good parking spot close by.

A colleague journalist from Germany had reserved an excellent seat for me and in the Vechta stands, it is amazing how much you are surrounded by "famous" people. On my right I had WBFSH director Klaus Miesner with his wife Susanne. Behind me was the famous Dr. Genn from Muhlen, in front there was FEI dressage rider Oliver Oelrich and the German journalist sat on my left. Horse talk is all you hear!!

Many stallions presented themselves in such a different way in freedom compared to on the lunge line. Each stallion came in individually for his jumping and after six stallions, all were hand walked so the judges can assess the quality of the walk one last time before they announce which stallion is licensed and which not. 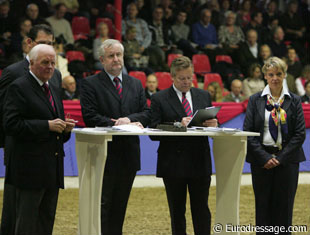 The judging panel, consisting of Dr. Evelyn Schlotmann, Wolfgang Egbers, Wolfgang Schulze-Schleppinghoff and Ulrich Henschke (no Wolfram Wittig to be detected), was remarkably on the ball this year. There wasn't a stallion that didn't get licensed and actually should have been. However, on the contrary, the panel was generous handing out licensing cards because there were about five in the collection which shouldn't have passed!

The absolute winner of the "scandalous licensing of the year" award was catalogue number 34, a very unflattering, old fashioned looking grey stallion owned and presented by famous show jumper Rene Tebbel. This Sorento x De Niro x Erszand has a horrible topline and three stiff, unexpressive and very limited basic gaits. He looked normal, he was slow behind and had no talent whatsoever. Furthermore, this horse was not properly presented on the lunge line (Tebbel was already leaving lunge ring 2 while the second horse was still cantering in lunge ring 1). Explain me why this horse passed?!
Editor's note: the next day this horse was offered for sale at auction and nobody even bid on it! 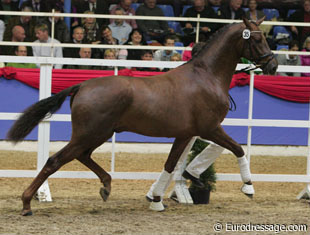 Other miraculous approvals were given to Nr. 33, Paul Schockemohle's black Sir Donnerhall x Prince Thatch xx, which was irregular on the lunge line, showed no walk at all in hand and was totally stressed out during the jumping in freedom. Schockemohle was very lucky with yet another stallion: nr 30. a Sir Donnerhall x Banditentraum. Though the bloodline of this bay colt is very interesting and he has a lofty uphill front which made him a crowd pleaser in Vechta, he was weak in the loin, long in the back and not stepping under behind despite his active hind leg. This horse was also very tense and running like crazy during the free jumping. So no thank you.

The committee probably wanted to be generous to LUX-dressage, a Luxembourg investing company which bought price highlight Statesman last year for 400,000 euro, because their motivation behind accepting nr. 27, a Sandro Hit x Brentano II x Warkant was at my wit's end. This bay stallion had a very long lower hind leg which was slow and not stepping under. In walk he almost paced and his jump was not to brag about. Kyra Werdin's Samarant x Dream of Glory was also generously approved though probably he was one of the few colts with a super trot. His hind leg was quick and he really pushed himself off the ground, but unfortunately this stallion failed to impress in walk and canter and he carried his tail very stifly.

You might think that after three paragraphs of negative criticism on some lower quality stallions there weren't any good horses in the licensing lot. Yes there were and even many really nice ones, but you'll read all about that in tomorrow's article about the premium stallions. 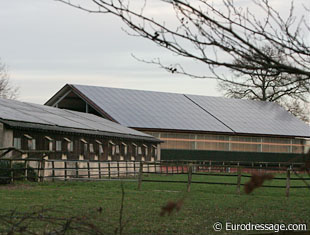 There was a lunch break when the dressage colts finished the jumping in freedom and after that Thomas and I drove to Reitsport Schockemohle, the most amazing tack store in the area, followed by a quick stop at Schockemohle's stallion station around the corner. We went to look at Furstenball, the 70-day performance test winner of Schlieckau, which is owned by the Danish Lone Boegh Henriksen. Furstenball's neighbours are Furst Romancier and Sir Donnerhall. We also saw Sandro Hit snoozing as well as San Amour begging for a facial rub.

Before we left the station I noticed that almost all farms in the area use power from solar energy and have massive amounts of solar panels on their roofs. Good idea to generate green energy.

We're now at the hotel and have planned on a small champagne party to wet our appetites before dinner. 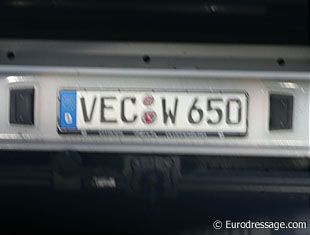 The road to Vechta is one filled with memories. After a brief one-day visit last year to the 2008 Oldenburg stallion licensing and skipping the 2007 when due to other obligations, the time was right to return to Vechta this year to check out the latest crop of promising young stallions as well as meet up with my Danish breeder friends, whom I met through ridehesten journalist Thomas Bach Jensen back in 2003.

On the first day of the licensing on Thursday 19 November 2009, I wanted to be at the Oldenburg equestrian centre by 16h to see the lunging, which has become a fixed part of the stallion approval for the Oldenburg breed. I left home (which is Belgium) at 1PM only to get stuck behind a caravan of lorries in The Netherlands 10 minutes later. The time lost on the Dutch road I hoped to catch up in Germany on the "Autobahn" but I faced the first of six major road constructions already at the German border in Wachtendonk. Amazing, but I've never seen an exit being closed off with two white party tents installed on the motorway. As if someone had hired off the freeway for a wedding. I guess they were more likely digging something up in there.

Despite this road work, the drive went smoothly and as everybody knows, people drive fast there! At a certain point on the right line, which in Belgium is reserved for fearful drivers who don't dare to go any faster than the grandma-speed of 70 km/h, there was traffic flying by at a minimum of 130 km/h, so you can imagine the speed in the middle and left lane. If your car actually shakes when someone comes rushing by, you know they are racing at terminal velocity.

In the old days Thomas and I would carpool and we'd stop over at the same gas station as always to get some Prince cookies and let dog Lola out, but this I just passed that Hohe Mark station on the A43 reminiscing. My musical partner on the way to Vechta is usually my ipod, but more recently I listen to the fascinating military radio station BFBS1. This time I had to flip channels because the presenter has such a dumb and annoying voice. He certainly did not sound as the sharpest tool in the shed.

I arrived late in Vechta and missed the first twelve horses being lunged. Dang. Fortunately I still caught a glimpse of one of this year's highlights, Blue Hors' catalogue number 16, a bay Hotline out of Elite Mare Merethe (by Florestan x Donnerhall x Classiker). 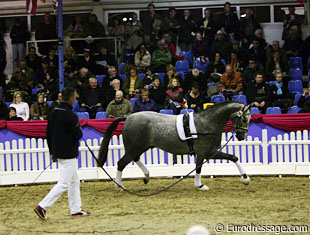 Watching the lunging is quite special as the horses are tied in side reins and their gaits come close to being a representation of how they would appear under saddle. They don't move on a straight line in freedom in hand, but they move on the circle with their head at the vertical. Some handlers were tricky by either strapping the horses in too tight or too long in order to mask the "natural" quality of the gaits. One horse was deliberately not shown in trot and the handler acted as if he didn't have his horse under control, but you constantly saw him encouraging the horse to canter. As soon as this black horse did a few trot steps who was very clearly irregular!

The two horses that appealed me the most on the lunge line was Blue Hors' Hotline x Florestan as well as the Danish bred Lauries Crusador x Robin x Schwadroneur, which would be very interesting new blood for the Oldenburg breeders.

After the lunging I caught up with a few friends from Germany and America and drank hot chocolate in the lounge downstairs. The plan was to come together with the Danish gang at a hotel in Dinklage for dinner. The company was golden, but the food was so-so, at least my dish. I ordered typical German pork schnitzel, which tasted more like wild boar, and it had no sauce to conceal the greasy taste of it all. Fortunately the baked potatoes were good and I drank some delicious Chilean chardonnay to flush everything down!

A Danish gathering can not be complete without the tradition Irish Coffee moment. After dinner we assembled in one hotel room and made Irish coffee. I brought some Belgian chocolates as treat while the others had whiskey, coffee, mugs, sugar and even whipped cream with them to throw a small party. This Irish Coffee moments are all about catching up with each other, discussing the stallions we saw in Vechta and talk about breeding plans for the next year. It was a lovely evening, though I went to bed somewhere between 1 and 2 am because I was knackered.