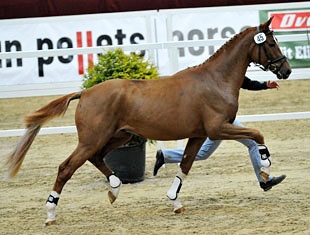 Of course a Quaterback offspring from his first crop had to become the 2009 Brandenburger Licensing Champion at the licensing in Neustadt-Dosse on 12-15 November 2009.

Fifty-nine stallions were presented for licensing, 13 were approved and 7 became premium stallion.

The Quaterback x Kolibri offspring bred by Schulz & Mäkelberg from Beuster, Germany, was proclaimed champion. "He has a lovely face and one can see that with Kolibri on the dam side he will be a versatile breeding stallion", said breeding director Dr. Ingo Nörenberg. The stallion is owned by the Brandenburger State Stud of Neustadt-Dosse.

Erhard Ploewka's Clarence x Levisto colt became the reserve licensing champion. "You would have expected him to be part of the show jumping collection," Dr. Nörenberg commented. "He was always uphill in the movements with a truly great jump."

Other premium stallions were the Johnson x Samba Hit I, the Askari x Heraldik xx, the Con Sherry x Zenturio and the Goldwing x Lesotho offspring.

The licensing champion amongst the show jumpers was a Quicksilber x Kolibri son. He sold at auction to Heiko Schmidt and will stand at stud at the Prussendorf state stud. 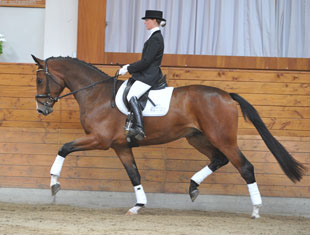 Related Links
Sancisco Offspring, Champion of 2009 Mecklenburger Stallion Licensing
Quaterback not be competing at the 2008 Bundeschampionate
Quaterback, Revelation of the 2006 Vechta Althengstparade