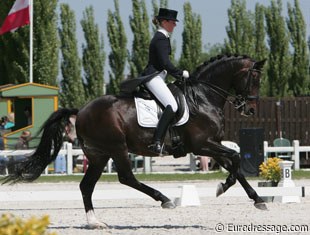 Two Belgian Young Riders have been selected to compete at the 2009 FEI Young Riders World Cup Finals held at the CDI-W Frankfurt in Germany on December 17-20, 2009. Anouck Hoet and Thibault Vandenberghe will travel to Franfurt to participate in this exclusive competition in which fifteen Young Riders from all over the world compete.

The 21-year old Hoet, who recovered from a severe injury sustained in a car accident, returned to the show ring this year to qualify for the Belgian Team that competed at the 2009 European Young Riders Championships in Ermelo. Hoet will be riding her steady partner Wild Diamond, by Welt Hit II out of Loreana (by Don Schufro), the full sister of Emma Hindle's Diamond Hit.

Hoet is in her final year as young rider and already has she qualified to compete at senior level in the small tour. She obtained her CDI qualification scores at two national competitions in Belgium. 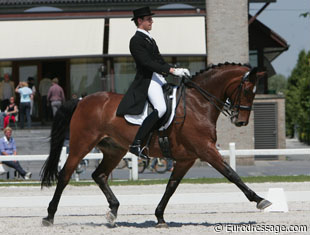 Second Belgian young rider Thibault Vandenberghe is only 20-years old and still has one year to go at Young Riders level. In Frankfurt Vandenberghe, who was the 2008 Belgian Young Rider champion and 2009 reserve champion, will be saddling his muscled14-year old Hanoverian bred bay gelding Decadent (by Davignon x Calypso II).