A Priority for the Acceptance of the Bit 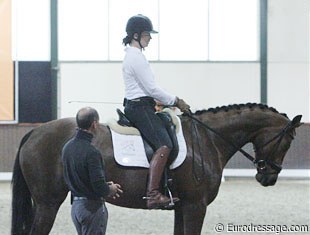 On Tuesday morning Steffen Peters returned to the platform to demonstrate how he trains young horses. His clear priority was acceptance for the bit as youngsters are trained to balance themselves more and are suppled in any frame."You have to analyse the contact at any time. Stretching needs to be done respectfully with priority for acceptance of the bit," Peters stated.

The first horse to enter was a 5-year old Jazz x Rubinstein mare with fancy movements but ridden downhill. The rider said that the mare would get quite tense at different locations. "You have to expose her to different situations and new environments," Steffen recommended. "Take those horses along to shows but don't compete them." The chestnut mare had a tendence to lean on the hand and go deep. “Don’t let your horse go quite that deep and risk not being able to pick her up.” The contact has to be gentle, no pulling. "You have to be in charge already with horses at a young age."

The second horse in the ring was a very normal 4-year old Orlando x Jazz offspring which spit out the bit and played with it instead of accepting a gentle contact. Peters especially worked on the rider’s position of the hands to fix the problem. "The connection is not established enough. You have to look for a frame where the horse accepts the contact."Peters hit the nail on the head when he stated that many riders look for too much expression and strength in a young horse. "The pure understanding, the adjustability and the rideability are underrated," he stated. 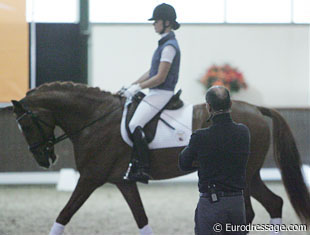 The third youngster was the 2009 Pavo Cup winner TC Athene (by United x Jazz). The chestnut is born out of a full sister to Adelinde Cornelissen’s Parzival and is a mirror image of the gold medalist. Jessica Buying was nervously riding this incredible mover and was constantly putting him in a too tight and too deep neck position. It was amazing to see how professionally Steffen Peters tackled this problem of the horse constantly rolling up his neck. “There needs to be a reason for him to be so deep right now. He should have a closed, adjustable frame, but make sure he doesn’t get stuck in it because you'll need 20 minutes to get him up. He needs to be more open with the pole as highest point and his nose forwards.” Athene is quit short in the neck and even on the free rein he was not stretching his neck properly. "We have to make it our goal to make the pole the highest point," Steffen encouraged the rider. 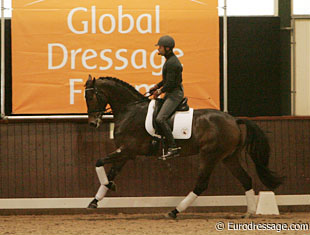 Finally Steffen mounted a 3-year old Ravel x Gouverneur mare which was saddle broken four months ago. The mare had quite opinion and was not really willing to accept the bit. She regularly evaded the contact by throwing her head in the air but Steffen stayed calm and said he was “looking for basic acceptance of the aids. Instead of using a lot of leg, I give small taps with the whip to get her attention. There is no need for her to take a nose dive. I don’t make a big deal out of her resistance but I do address it.” Peters asked for respect for the bit and compromised expression for it. “The tempo itself shouldn’t be evasion. I do lots of changes of direction on a young horse.” Peters did get the mare lighter in the hand and even on two reins, but this 3-year old was already heavily grinding her teeth at the end of this 15 minute session.

Everything Steffen taught or demonstrated was with an amazing gentleness and patience. During the panel session he was asked if he does half steps or piaffe steps with young horses. He replied firmly, "if a horse accepts it without tension and can still walk and stand still without tension, I would do it in moderation. It will be a problem if we drill for it."