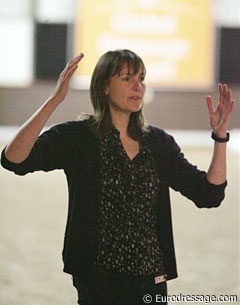 Dr. Rachel Murray, surgeon at the Animal Health Trust in Newmarket, did research on nearly 3000 dressage horses and concluded that lameness in foot, hock and suspensory ligament was the most common injury. By using MRI and other diagnostic imaging, such as scintigraphy, it has become much easier to pinpoint the exact problem or injury in a horse. An early diagnosis of injury is essential to avoid damage becoming irreversible, either mentally or physically.

33% of the horses in Murray's research group had been lame at some point, and 23.5% had been lame in the past 2 years, with an average time off of more than five months. 20% of the horses reported suffered from back pain, while 4,6% had breathing problems. Respiratory problems increase the risk for lameness by more than 4 times, which may be due to fatigue, tiredness and less oxygen to the muscles. The types of injuries seen are different in horses at different levels of training. Especially FEI level horses carry more weight on the hindquarters and are more likely to have injuries of the hind limbs. 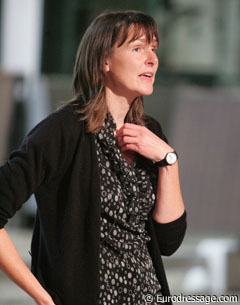 Signs of lameness are loss of rhythm, usually in one type of movement, resistance in a specific movement, usually on one rein or on a particular surface, and being late in the flying changes behind. Murray remarked that there is a fine line between peak performance and injury. Multiple injuries often occur together. "Horses alter their gaits to compensate. They are more likely to get back pain," she said.

Horses that shuffle behind in pirouettes frequently have problems with the sacroiliac joint, the joint that connects the hind legs to the back. Some horses suffer from kissing spines when they lose their back muscles. They need to be kept in training to strengthen their abdomen. Bigger horses are more injury prone as they have long limbs that need to handle more power and pressure.

Murray confirmed that training on multiple surfaces is good for the co-ordination of the horse. "In order to adapt to this change they have to strengthen their bones and ligaments, she explained. "The larger the arena, the better." Murray compared the brain of a horse to that of a cat. "They are not good at thinking but very good at coordinating their limbs." 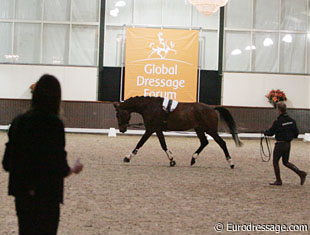 Training has to be done for strength and endurance and not just skill. Lunging and jumping are useful for the development of core muscle strength, which is protective against injury. Each training session needs to have a proper warm up, a training and a cool down for the recovery of the horse.

Probably the most important statement made during Murray's session was the undeniable fact that regular and long turnout of horses in the field is protective against lameness. As the horse is able to move around much more it keeps itself flexible. Most dressage riders lock up their horse and only ride it or hand-walk it, but turnout improves the bone, tendon and muscle structure. Murray stressed that correct shoeing has a tremendous impact on the biomechanics of a horse. A fitting saddle is also paramount as it reduces back pain considerably. 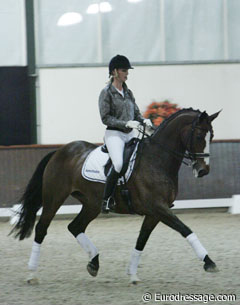 Murray is a very eloquent and fast speaker and her academic approach to injury was illuminating, though for some auditors a bit too much to cope with. To conclude her session, Murray asked the audience to look at a 3-year old being lunged in a different way. She focused on the way the horse puts his legs down and is putting pressure on its joints. Imke Schellekens rode her upcoming Grand Prix horse Victoria (by Havidoff x El Corona), while Murray zoomed in on the pressure points on the bones and muscles in the lateral movements, pirouettes and piaffe and passage.