Zuidenwind Most Popular Breeding Stallion in Sweden in 2009 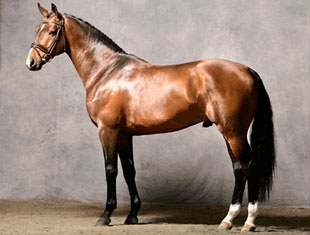 The Dutch warmblood licensed and Swedish warmblood approved stallion Zuidenwind has been the most popular breeding stallion of the year in Sweden.

The Swedish Warmblood Breeders' society (ASVH) released the list of breedings this year and out of 4608 breedings registered by ASVH in 2009, 146 are from Zuidenwind.

The two up and coming stallions in Sweden, Zuidenwind and Nintender, proved to be the most popular ones. Zuidenwind is by OOSeven x Jazz and was the 2008 Pavo Cup champion. He sold to Sweden in the winter of 2009 and is currently ridden by Rose Mathisen. Show jumper Nintender covered 144 mares.

The third most popular stallion in Sweden was Hip Hop (by Feleciano x Electro) with 109 breedings. He came from 166 breedings in 2008. The fourth most used stallion was another show jumper, Ludwigs Champion with 106 mares. In 2008 the most used stallion was Careful (by Caretino x Calypso II) which had covered 168 mares, but he dropped to 70 mares this year.