Quaterback Offspring In the Ribbons at 2009 Dressage at Devon 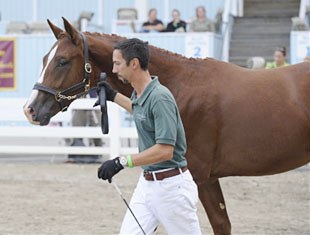 Dressage at Devon, one of the most prestigious dressage and sport horse breeding shows in North America, kicked off its opening day with an impressive roster of some of the continent's best sport horses. Topping the select group of youngsters was Perfect Qredit, a yearling stallion by Quaterback, who claimed the Young Horse Championship and the Colt Championship, as well as the Yearling Colts and Geldings class.

The trip to Dressage at Devon was a first for Perfect Qredit's owner, Michelle Coursin, an air traffic controller based in Afghanistan who uses her two vacations each year to return to the United States to pursue her interest in dressage. Formerly a hunter rider, Coursin selected the stallion from photos as a one-month old foal and now keeps the youngster at Hilltop Farm.

"To know that I picked him at a month old and see him grow up, win or lose, is amazing," Coursin says. She is looking forward to watching the young stallion mature and hopes to take him through the stallion licensing process. Bred by Yancey Farms, the Quaterback son is out of Dream Rubina by Dream of Glory.

Winning the Filly Championship and the Reserve Young Horse Championship was Nancy Holowesko's two-year-old Marmara, by the Thoroughbred stallion Licoto xx out of the Landadel mare La Montana. The filly was purchased from the Elite Foal Auction in Vechta before being imported to the U.S. In addition to her championships, she claimed the Two-Year-Old Fillies class with an impressive 81.00%. "She is an exceptional filly and has a strong Thoroughbred influence with warmblood gaits," Holowesko says. "This will be great as a performance horse, but even better when she becomes a broodmare." Finishing with the Reserve Filly Championship was Victoria Lamas Wanner's yearling mare Dazzle, by Jazz out of Zizarma.

Canaan Ranch's filly Divinity CR claimed the Foal Championship after winning the Fillies of 2009 class with an 82.50%. "Devon is where you get to see how you stack up against the rest," says owner and breeder Melanie Pai. Divinity CR is by the Diamond Hit stallion Donates and out of Scarlett, a mare that has produced many top babies for Pai. "I was really happy when I saw Divinity hit the ground," she recalls. Taking the Reserve Foal Championship was Faberge MF. The Fidertanz daughter was bred by Marydell Farms and owned by Alice Tarjan.

Topping both the Suitable to Become a Dressage Horse Three-Year-Old and the Three Year Old Colt and Gelding Materiale was Somer Hit, bred by Rolling Stone Farm. The black colt by Sandro Hit and out of EM Rhussia received an impressive 83.80% in the materiale class.

Pikk Elena HU, bred and owned by Horses Unlimited, claimed the Suitable to Become a Dressage Horse Four Year Old. The bay mare is by Pik L, an 11-time winner at Dressage at Devon, and out of the Don Primero mare Donatella.

In the Three Year Old Filly Materiale class, Wild Rose brought home the blue with a 71.60%. The filly, bred by Karen and Tom Schwencer, is by Widmark out of EM Berlina.

Wednesday at Dressage at Devon promises even more excitement with the crowning of the Mare, Stallion, Mature Horse and Overall Grand Championships. The announcement of the Born in the USA Breeder's Awards will cap an exciting day. For complete results and schedules visit www.dressageatdevon.org.