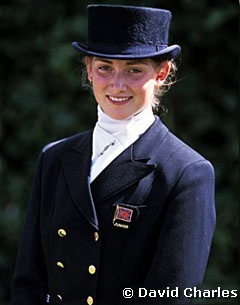 British Dressage has completed the selection of the dressage squad to represent Team Great Britain at the 2009 European Dressage Championships this summer. Maria Eilberg (25), from Redditch, and her horse Two Sox join Laura Bechtolsheimer, Emma Hindle and Carl Hester in the team to compete at the Championships, which will be held in Windsor Castle from the 25 – 30 August.

Fiona Bigwood (33), riding Wie Atlantico has been selected as non-travelling reserve for the team.

Of her selection Maria said; “I’m thrilled to be chosen for the team, it’s been an ambition for a long time so it was an amazing feeling to get the call. Two Sox is such a consistent performer and absolutely at his peak, we’ve had him since he was a three year old so he’s really one of the family. This is a once in a lifetime opportunity for him to perform in front of a home crowd at a European Championship and I’m so pleased he’s finally got his chance.”

Richard Davison, British Team Captain comments; “With the competition only 25 days away it’s good to have the final member of the team decided so we can focus on the job in hand. In her role as reserve rider for last year’s Olympic Games Maria was an excellent team member and it’s great that she has made the cut this year. Maria’s selection now completes a very strong team and, although we cannot be complacent, I believe we are fully justified in having a medal clearly in our sights.”