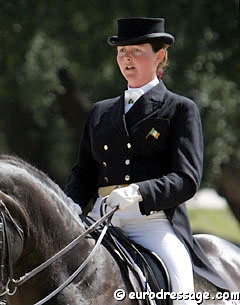 In a historic day for Irish Dressage, Yvette Truesdale from Co. Down on Thursday secured her slot at the 2009 European Dressage Championships in Windsor with a seventh place in the three- star Grand Prix at Hickstead, England.

Truesdale, trained by leading international dressage trainers Conrad Schumacher and Ferdi Eilberg and riding 'Has to be Fun' owned by Jim Burgess, also ensured Ireland's second qualification for the World Equestrian Games (WEG) at Kentucky in 2010, alongside Anna Merveldt.

Having achieved one score above 64 per cent at the three-star event at Haprtpury last week she today needed another to achieve European and WEG entry - and received it from Dutch FEI 'O' judge Wim Ernes.

And with Judy Reynolds and 'Remember' today taking an individual Grand Prix score above 64 per cent from British FEI 'O' judge Stephen Clarke, the 28 year- old is now one score away from WEG qualification, greatly increasing Ireland's chances of fielding a team of three at the Games.

Reynolds, Truesdale and Merveldt are all members of Horse Sport Ireland's Dressage High Performance Squad, along with Anne Marie Dunphy.