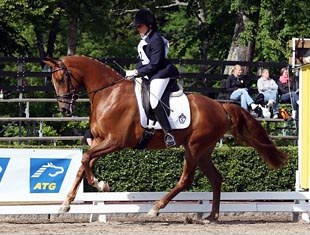 It was the first time in history that a foreign born mare won the National Mare Show in Sweden since its inception in 1902.

First Love is bred by Uwe Marken from Westerstede, Germany, and owned by the American Colette Ross-Prince and the French Harald Prince, who live in Stillingson, Sweden, where they operate a small high quality breeding farm called European Dressage Design.

First Love was presented under saddle by the Brazilian Adriana Zonari. The judges commented that the chestnut mare has "three very elastic and balanced gaits and an amazing rideability." The mare scored 88% in total.

"We purchased First Love in utero before she was born," Colette Ross told Eurodressage. "We had just sold her full brother First Wish to Jan Brink the same week. This full brother was later Swedish stallion test winner 2007 and winner of the 3 and 4 year old Swedish Dressage Champion and will now try to  the qualify for the World Young Horse Championships. Our coming plans with First Love are the 3-year old riding horse championships in October and possibly embryo transfer breeding."

The 2009 Reserve Mare Champion was Dafne, a Don Romantic x Donnerschlag x Gauguin de Lully offspring bred and owned by Per Arne Persson. This Swedish branded mare was presented by Ann-Sofie Antonsson and scored 87% in total.

The Swedish mare Constantia (by Sandro Hit x Davignon x Flamingo) finished third with 86%. She is bred and owned by the Stjarnbro brood farm and was ridden by Helena Larsson.