Hoffmann and Rubinio to Represent the U.S.A. in Verden 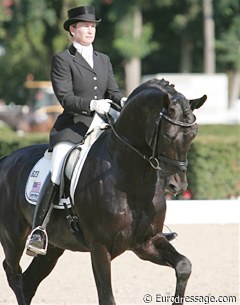 The black Westfalian stallion Rubinio and his owner Jennifer Hoffman will represent the United States in the six-year-old division at the 2009 World Championships for Young Dressage Horses in Verden, Germany August 5-9, 2009.

Rubinio is bred by Jürgen Bunge in Germany and is by Rubin Royal x Florestan. He is a licensed breeding stallion and represented the U.S. as a five-year-old at Verden, placing fifth out of 39 horses in the small final with a score of 8.06.

The selection of Rubinio was announced by the U.S. Equestrian Federation on Thursday with the final results of the 2009 Markel/USEF Young Horse Dressage Selection Trials that were held in Illinois, California and North Carolina.

Rubinio was the only horse to meet the short list criteria of earning an overall score of 8.2 or better at one of the Markel/USEF Young Horse Dressage Selection Trials or an international competition. Rubinio, qualified by winning the Bundeschampionate class with a score of 8.2 in Haftenkamp, Germany in mid-May.