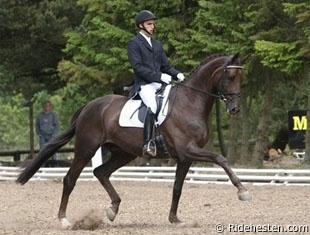 The third Danish selection trial for the World Young Horse Championships too place at the Holstebro riding centre last weekend. There is one more trial to go before the finals, where the actual team for Verden will be decided on based on scores.

In Holstebro, Andreas Helgstrand won the 5-year old division with Hønnerups Driver scoring a stunning 9,38 (which is very promising for Verden!). He also finished second on UNO Donna Unique with 9,12. With the German bred stallion Laetare (by Lord Loxley) Helgstrand finished third with a score of 9,04. It is rumoured that Helgstrand will ride Laetare at the World Championships representing Norway as the stallion is partly Norwegian owned.

In the 6-year old division Sabine Petersen and Atterupgaards Cassidy scored the highest with an overall mark of 8,34. Akinos and his rider Andrea Christina Woodart Sandstrøm placed second on 8,04.

The last Danish WCYH selection trial before the decisive finals is 20-21 June 2009 at the Dalumgaar Riding Centre. The Finals are held 4-5 July in Middelfart where the definitive team for Verden will be assembled.