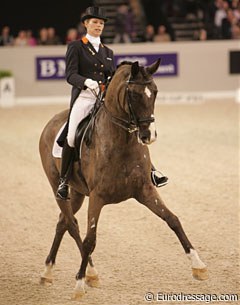 Necessity is the mother of invention. Anky van Grunsven's partner Sjef Janssen is going to make sure that Anky will compete Salinero in Las Vegas.

Janssen told the Dutch Press Agency ANP that he'll hire a lawyer if that is what it takes for Anky to get a wild card.

On a formal level, Van Grunsven has not complied with the regulations to earn a berth with Salinero at the 2009 World Cup Finals. She had to compete her horse twice in a World Cup qualifier in order to be eligible to go. The Dutch Equestrian Federation also did not apply for a Wild Card with the FEI (due date was 15 March 2009). Furthermore, a "wild card horse" also needs to have competed in two world cup qualifiers in order to be entitled to a wild card.

As Janssen is now hitting a brick wall with the rule of two qualifiers -- a requirement which he himself passionately pushed through with the FEI as official rule -- he has told the press he won't accept his own rule. According to him, there is plenty of room in the rules to circumvent the problem.

"The rules are not waterproof, that is clear," Janssen told ANP. "If the FEI wants it, Anky will compete, but apparently they don't want that. Formally, Anky is qualified with Painted Black and the instances seem to want her to take him to Las Vegas."

Janssen does not expect his wife to ride Painted Black. "With Painted she can win a medal, or finish eighth. And for that she won't travel half the globe. If she goes, she goes to win," Janssen said. Anky herself said that she still wants to think about it, but stated that she shares the same viewpoint with Janssen.

Anky considers the decision of the FEI disappointing. "It's a shame. I don't think our sport has many big names. It seems good to me that for the sport as many big names are allowed to participate," she commented.

The reason why Van Grunsven did not compete Salinero twice has two causes. First of all, the horse got a long break after the 2008 Olympic Games and secondly she had planned on riding him at the CDI-W Gotenburg but a back injury prevented her from riding.