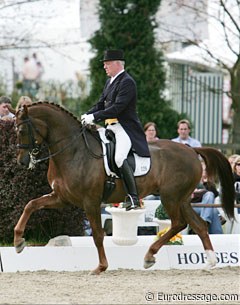 Hermann Gossmeier's Rhinelander gelding Favourit has been sold to the Swedish Tinne Vilhelmson. The 10-year old liver chestnut gelding is Vilhelmson's new hope for the future.

Bred by the renowned Eberhard Schulte-Böcker (breeder of Florestan I), Favourit is by Fidermark out of Wonne (by Worldchamp x Fidelio). Austrian owner Ursula Jungwirth put the gelsing in training with Hermann Gossmeier four years ago. The professional dressage rider trained the liver chestnut up to Grand Prix level and competed him last year in the Medien Cup, the Upcoming Grand Prix horse show circuit in Germany.

"He only did three Grand Prix tests in his life," Vilhelmson told Tidningen Ridsport.

"He looks really good. I've seen the horse before in Germany and it is amazing how Tinne has developed him in four weeks time," Schmidt commented. 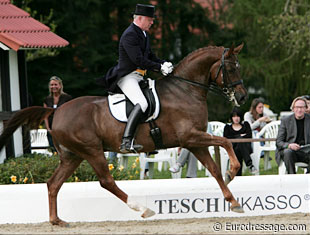 Vilhelmson's number one Grand Prix horse is Solos Carex (by Castro x Lagano), which she competed at the 2008 Olympic Games. Their next competition is in two weeks at the CDI-W 's Hertogenbosch. Last year, Vilhelmson was coached by Klaus Martin Rath. At the beginning of her career, she received her first serious training from the German Walter Christensen.

Vilhelmson lives in Upplands Väsby near Stockholm, Sweden, and works together with horse enthusiast Antonia Axson Johnson, who initially lived in the U.S.A. but returned to Sweden where she started breeding Quarter Horses and importing Morgan horses. In 1995 Antonia's interests switched to dressage horses. At Lövsta breeding farm, Axson Johnson and Vilhelmson-Silfen breed, rear and train dressage horses.