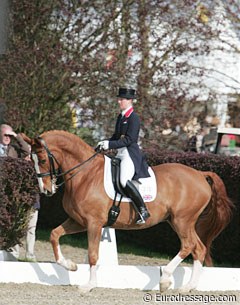 Sport England this week announced an investment of £480 million to deliver grassroots sporting opportunities and a lasting Olympic legacy of one million people playing more sport, this included an award of over £5 million for equestrian sport.

"The BEF team has worked hard to secure Sport England's support and confidence," said British Equestrian Federation (BEF) chief executive, Andrew Finding. "Now we must work hard with our member bodies to ensure we are able to increase participation, sustain people in equestrian sport and help them excel."

This level of funding reflects both the excellent work that has been done across the whole federation with previous funding and also the detailed planning and clear concept of future grass roots sports development that the BEF has been able to produce.

The federation aims to continue to work through its member bodies to achieve an increase of approximately 10,000 new participants per year taking part once a week.

The new funding is about more than just increasing numbers, there is a greater emphasis on sustaining participation and developing talent. The federation will be focusing on improving the experience within equestrianism by channeling more funding into coaching, volunteering, equine development and club or riding school systems. It will also work to identify and support talented participants moving towards world class development standards of performance to ensure future generations of excellence.

The BEF will be assisted in this by Sport England's newly devised survey to measure sports performance in this area. For the first time ever all sports will be able to fully understand what makes a quality experience for participants in sport and gain specific feedback on how to make improvements.

The funding will also assist with the development of a National Equestrian Institute for the Equestrian world and provide a firm link between national and local delivery of the key aims of the federation in its widest sense.

There is little doubt that previous Sport England funding has contributed to this rise. The BEF has been able to develop a small team of part time regional development coordinators. In the new year they will be joined by a small team of part time regional coaches and both of these roles will coordinate with and support the member bodies in the delivery of Sport England funded participant programmes and link them to available funding opportunities.

The BEF has worked with the UK Coaching Certificate framework to increase the number and quality of coaches in equestrian sport, while at the same time developing volunteers. This programme has been rolled out across many of the federation member bodies.

The BEF has been awarded the license to accredit Clubmark clubs in the equestrian industry, the Sport England mark of high quality clubs, reassuring both parents and participants that the club is a high quality, welcoming environment for young people. The British Horse Society has been instrumental in leading on a pilot of this scheme, supporting a number of their approved centres to progress towards gaining the accreditation. The BEF will now continue to roll out this scheme across all relevant member bodies to allow a variety of clubs to gain the mark.

Early investment has also been made for the Pony Club and the Riding for the Disabled Association (RDA). This contributed to the costs of development coordinators for the Pony Club to increase participation and develop new centres. The RDA received funding to deliver a programme of volunteer development, to support both increase in numbers and retention. More recent investment has been used to implement a regional programme under the UKCC coach development initiative, to support Pony Club centre proprietors, and to develop talent at regional level.

The BEF has also directed Sport England funding to increase participation through the non-Olympic sports, including supporting clubs offering the sports of vaulting, reining, endurance, driving, horseball and polocrosse. With the Olympic disciplines, Sport England money has been utilized to develop a 'pool of talent' across disciplines to sit below the World Class Programmes and ensure a cohesive participant pathway.