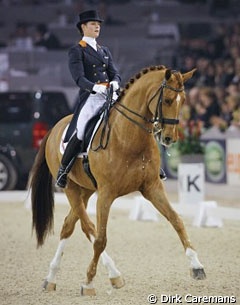 A freezing sunny winter outside and inside the warm Christmas atmosphere in the Nekkerhal in Mechelen, Belgium, was the environment for the sixth World Cup Qualifier in the Western European League.

Once again it was won by Dutch Adelinde Cornelissen aboard Parzival, who after Stockholm and London scored a hattrick by winning her third.

“It was my third, but not my easiest”, Adelinde reacted. “The Nekkerhal is quite something with the rumour and distractions all around. You all have seen that Parzival had his eyes not only focused on me. I was constantly planning other lines in my choreography not to bring him and myself into difficulties by asking lectures like the pirouettes too much on the borders near the distractions. I succeeded in this, but I have to admit Parzival was a bit on the handbrake too. Of course I prefer more expression, but that asks for the right time and place too.”

Runner up Anky van Grunsven aboard her black stallion Painted Black had other difficulties to cope with. As Painted Black had some mistakes in yesterday’s Grand Prix, especially caused by the contact, she felt very happy with the looseness, obedience and nice contact of her stallion today. However already in the start of her Freestyle she witnessed a wrong musical cd with a practice-tango-Freestyle was played, not the special and real show edition for Painted Black.

“It’s all me to blame, I feel like a beginner”, Anky said. “There are three mistakes I have to count. It started with not packing my cd’s at home myself. The second one was not bringing my official end reserve cd to the organiser myself. And the third and not the least was refraining from the sound check. As Painted Black was really with me this time, I felt even more sorry.”

The third Dutch in the row of prize winners was Olympian Hans Peter Minderhoud aboard Exquis Nadine. He easily could have been the third man to grab the prize. The mare Nadine had wonderful extensions and expressed her easiness for instance in the half passes and transitions to the extreme. However only Isabelle Judet agreed on the win. Wim Ernes felt a bit surprised not to have given Nadine and Hans Peter Minderhoud the highest points. The pirouettes that were performed too big and the piaffe that is a bit out of balance sometimes might have prevented a higher score.

“I feel sorry as I had a great feeling, both yesterday and today. I hoped the judges would have given me more advantage of the simplicity and easiness”, Hans Peter said, who also won the two Intermediate classes with his stallion Tango.

Immediately after Minderhoud Jeannette Haazen went for the fourth position. The wonderful and fitting music all mixed and done by Jeannette herself was very cheerful. A higher position was prevented by the missing of the halt in the end and today Nartan did not show the piaffe to his advantage.

Apart from the victorious Dutch in the first four places, the Belgian riders showed nice improvements, to the enthusiasm of the home crowd. For Jeroen Devroe a flash back came over him when he left the arena with his only 8 year old new talent Apollo van het Vijvershof. The remembrance of his late Paganini struck him.

“I came to Mechelen to learn. If this is learning, there is a lot of promise in the future with Apollo and it should be a comfort”, Jeroen Devroe said. The best Belgian rider was national champion Stefan van Ingelgem aboard his big stallion Withney van het Genthof. “In four shows I am just happy with any shows’ improvements”, the modest Belgian said.

Chair of the judges Mariette Withages praised the field of participants with not only strong Dutch and Belgian competitors but also two Polish competitors who reallt gave nice performances. Olympic bronze medallist Heike Kemmer will not have very good memories to her visit at the Flanders Christmas Horseshow as she was eliminated. Her only 10 year old horse Royal Rubin showed blood in his mouth which is against the regulations.