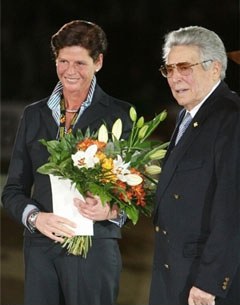 Ulla Salzgeber and her rising Grand Prix horse Herzruf's Erbe have won the 2008 Otto-Lörke Prize handed to her at the CDI Stuttgart in Stuttgart, Germany, on Saturday night November 22, 2008. The award is donated by the German Olympic Equestrian Committee (DOKR)

to the rider, trainer and owner of the most successful German Gand Prix horse of the year younger than ten years old.

Herzruf's Erbe is a 9-year old Rhinelander bred gelding by Herzruf von Königspark x Caletto I and is owned, ridden and trained by Ulla Salzgeber. In 2008, the gelding competed his first year at Grand Prix level and booked ten victories of which winning the CDIO Grand Prix in Mondorf Les Bains was the first highlight of his blooming career.

Klaus Rheinberger, chair of the Liselott Schindling Foundation for the Promotion of Dressage, handed the award to Salzgeber. It also including one ton of horse feed and a 1,500 euro purse donated by the DOKR. Herzruf's Erbe himself was not present in Stuttgart as the horse is recovering from a minor injury sustained right after Mondorf Les Bains.

The Otto Lörke Prize was founded 24 years ago by Liselott Rheinberger (mother of Ann Kathrin Linsenhoff), who passed away in 1998. Rheinberger won eight gold medals at the Olympic games, World and European championships and is one of the most legendary dressage athletes of all times.