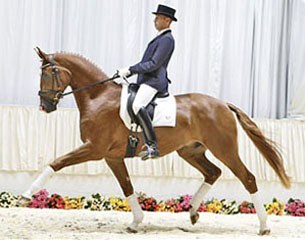 The Verden Auction, which is known for its record breaking achievements, was not able to beat the Vechta or Munster Elite auction price highlight this year. The 3-year old Bundeschampion Bacchus von Worrenberg (by Belissimo M x Calypso II) became the most expensive horse at the 2008 Verden Autumn Elite Auction with a knock down price of 195,000 euro, which is 205,000 euro lower than Vechta's auction record of 400,000 euro for Statesman.

Bred by the Swiss breeder's alliance Peters and Hodel from Switzerland and presented at auction by Wilhelm Schwierking and Rolf Waering, Bacchus sold to a dressage stable in Hamburg and will be ridden by Martin Christensen. The chestnut gelding dazzled the crowd and judges at the 2008 Hanoverian Riding Horse Championship in August and at the 2008 Bundeschampionships in September with his superb gaits, even though his movement mechanism stretches and strains the fetlock, as the cannon bone virtually touches the ground with each stride especially in canter.

Auction manager Dr. Guenther Friemel and his team were completely satisfied with this result. Although the pricing was excellent, there was a modest reduction in export rate, compared to last year. 33 horses will leave Germany. Five horses were sold to Canada, four to France and Spain.

46 foals sold at the Elite auction. They were sold at an average price of 6,920 €. Top-priced foal was the Hotline x Lauries Crusador xx-colt Hidalgo (breeder and exhibitor: Horst Rosenblatt), which sold for 20,000 € to a stallion station in Switzerland.