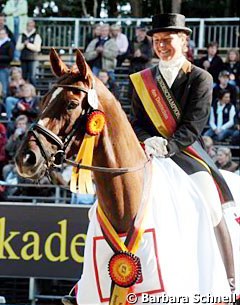 Who would have thought that Waioni, a liver chestnut Hanoverian mare which gets to spend each day out in the field with five other horses, would become the 2008 German Young Dressage Horse Champion?

How can a horse, which is probably the only horse at the show who lives a true horsey life, become a champion at the highest professional echelons in the sport? Waioini has three outstanding basic gaits, she is correctly ridden in the classical way and it clearly looks like she not been pushed or stressed to perform. Waioni is a happy athlete, a horse which tries hard for its rider and which seems to get respect back from the lady in the saddle! Only twice a week owner and rider Mareike Mondrowski, a school teacher by profession, practices dressage and the rest of the time, the duo is out hacking!

Mareike Mondrowski's Waioini (by Waikiki x Fabriano) is not the super star mover with elasticity beaming from the body and with legs that look like suspenders, but she has highly functional gaits in trot and canter, an outstanding walk and she is well ridden. Commentator Christoph Hess praised this horse for its "looseness in the body," its "lightfooted gaits" and its "natural self-carriage." The mare was on the hind leg every second of the ride, she crossed her legs well in the half passes and executed superb walk pirouettes. The canter could still be more supple in the legs, but Waioni performed correct flying changes. She scored8.5 for trot and canter, 9.5 for walk, 8.0 for submission and 9.0 for general impression. Their total of 8.70 placed them first. 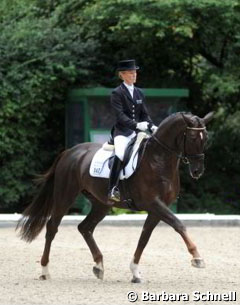 Furst Khevenhuller, last year's 5-year old Bundeschampion, finished in reserve champion's position. The Rhinelander gelding by Florestan x Rohdiamant is owned by Elisabeth Max-Theurer and trained by Helen Langehanenberg. The liver chestnut showed fantastic half passes and has a springy uphill canter, but either rushes through the trot extensions or does not extend enough. The flying changes were not as confirmed as one hopes to see them at this event. The horse leans on the rider's aids and the changes lack fluency, but Furst Khevenhuller is a future FEI talent and more can be expected from him. He scored 9.0 for trot, 8.5 for walk and canter, 8.0 for submission and 9.0 for general impression. Total: 8.60.

Third place went to a super mare, La Stella, for whom the Bundeschampionate must have been five days of hell. Her rider Rudolf Widmann seems to think he is the champion of the warm up. During a training session on Saturday, the day before the finals, he walked his sensitive mare for one minute, only to pick up the reins and proceed in extended trot or canter round after round. The few technical movements he tried, such as the walk pirouettes, failed miserably. La Stella is an imposing and impressive horse, but there is not a bit of true relaxation to be seen in her body during training. In the finals La Stella (by Locato x Loutano) showed off her world class gaits but several training issues appeared. She was crooked in the trot extensions and the flying changes looked so forced, as the rider made bigger changes with his body in the saddle, than the mare with her legs on the ground. The judges were very generous when they gave them an 8.5 for general impression. The 9.5 for trot was deserved, as well as all other marks for the gaits (8.5 for walk, 8.0 for canter). They scored 8.50 overall. 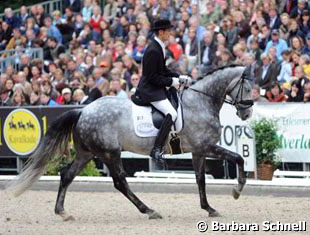 Marcus Hermes and Santorini Hit finished just outside the medals. The very elegant, unusually grey Sandro Hit sonSantorini Hit (dam sire Furioso II) had three very good, functional basic gaits which all received an 8.5 score. Occasionally the horse was too high in the neck in trot which resulted in less proficient back usage. The judges gave the pair 8.0 for submission and 8.5 for general impression. Their total of 8.4 slotted them in fourth.