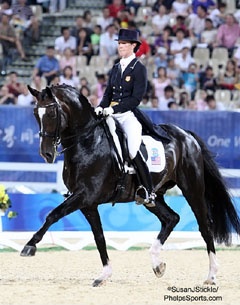 Courtney King-Dye, a member of the U.S. equestrian team's three-member dressage squad that competed at the 2008 Olympic Games in Hong Kong, China, rode Mythilus to a 13th place finish individually and helped the U.S. to finish in fourth place overall by placing seventh in the Grand Prix, the team round of competition.

On August 19, the final day of competition in Hong Kong, Mythilus tested positive for the non-steroidal anti-inflammatory drug Felbinac, classified as a Medication A Prohibited Substances under the FEI Equine Prohibited List. A preliminary hearing was held on August 22 in Hong Kong, wherein King-Dye was placed on provisional suspension until the final decision. The case was heard before the FEI Tribunal on September 7 in Lausanne, Switzerland, with King-Dye and her attorney in attendance. The Tribunal's decision was announced on September 22, 2008.

King-Dye responded to the FEI Tribunal decision today, saying, "Although I was very aware that the Zero Tolerance Rule would make it nearly impossible for the FEI to clear my name from this illegal medications use charge, I was still somehow extremely disappointed when I received their ruling this morning. In the FEI press release, the Tribunal clearly acknowledges my innocence and lack of negligence in their ruling. But the fact is that they have to punish me according to the FEI rulebook because I cannot prove where the drug came from. I can't prove it because I don't know."

In the FEI press release issued on September 22 announcing the decision, the FEI Tribunal stated: "...the Tribunal found the evidence of the PR [Person Responsible - Courtney King-Dye] and the US Dressage Team Vet to be credible and believed that neither the PR nor anyone on her behalf or related to the USEF had knowingly administered the medication to the horse. The Tribunal further accepted the PR's and USEF's arguments that they have done almost everything in their power to ensure that no rule violation shall occur."

At the hearing at FEI headquarters in Lausanne two weeks ago, King-Dye presented testimony and legal arguments on her behalf. King-Dye noted that Mythilus was treated at the clinic in Hong Kong Jockey Club prior to the start of competition nine times for heart fibulation, a disorder in which the rhythm of the heart is disrupted, but Felbinac was not part of the treatment. King-Dye could only speculate as to how the drug entered her mount's system. King-Dye further cited the Equine Anti Doping and Medication Control Rules, which contain an exception to a medication rule violation in case of an environmental contamination. She presented the argument that the exception should apply because Felbinac did not appear on the Equine Prohibited List as a threshold substance and no specific criteria was established for it on that list. King-Dye also pointed out that she had gained no competitive edge, and because of the nature of Felbinac and the minimal concentration detected, there were no findings that Mythilus underwent any maltreatment.

"I cannot place blame or resentment anywhere," King-Dye said. "My vet, my groom, my Federation and Team, and I did everything right, carefully and according to the rules. The FEI and the Tribunal handled the hearing professionally, proficiently, and well. I feel everyone involved did their best to follow the rules and to do the right thing in accordance with their jobs, and I am grateful that the Tribunal clearly acknowledges my innocence. They are bound by the wording of a rule, and it is their job to uphold the rules to the letter to the best of their ability. It is my hope that the wording of this rule will be re-evaluated. All people who use medications illegally should be punished, but the rules should also provide a way to vindicate a person who has demonstrated clear adherence to the rules and who is simply entangled in a strange situation."

King-Dye expanded on the 'strange situation' of this case explaining that Felbinac is a topical anti-inflammatory used mainly on humans. It is not approved, manufactured, or available in the U.S. It is mainly used as an over-the-counter ointment for humans in China, Hong Kong, and the United Kingdom. It is also sometimes used as a coupling agent in ultrasound gels and lubricants in those countries.

"When we first learned about that use, we suspected that Myth might have been exposed to Felbinac during his treatment for his heart in the Hong Kong Jockey Club," King-Dye said. "However, after doing more research on the drug and having a bio-chemist analyze the data, we learned that the trace amount found in Myth's system could occur from something as distant and arbitrary as a person using Felbinac on their knee then using a broom, then someone else uses the broom and shakes my groom's hand, and then my groom touches my horse. In the sampling, 14 nanograms per milliliter were found. It takes 7,500 to 100,000 nanograms per milliliter to have an effect on a rat."

The FEI press release also noted that the Tribunal had taken into consideration " ... the excellent stable management practiced by the US team and measures placed to try and ensure no horse with prohibited substances participates at the Olympic Games, the efforts made by the PR and the USEF to determine the source of the positive finding, the impeccable record and reputation of the PR, the PR's cooperation in the investigation and the hardship already caused to the PR including the fact that the US Dressage Team has already lost its fourth place at the Olympic Games."

Commenting on the ordeal, King-Dye remains positive about the sport and is looking forward to the future. "Though I am left with the feeling that this was rotten for me to have to go through, a terrible shame that both I and the Olympic Team are stripped of our placings, and my name now has a tarnish on it - I'm over that," King-Dye said. "Everyone did everything right, and it's just one of those things you have to go through sometimes. The heavy feeling that remains is that this will happen again to someone some day, and I do hope that we will take some measures to avoid that."