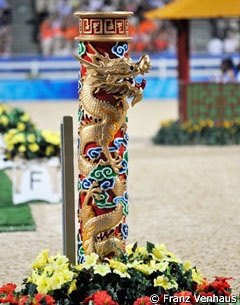 Four Olympic show jumping horses have tested positive to doping in Hong Kong. One German, one Irish and one Brazilian horse were expelled from competition as well as the team bronze medal winning horse of Norwegian Tony Andre Hansen. All horses tested positive to capsaicin.

However, the Hong Kong Jockey Club houses one of the best doping laboratories in the world, run by Dr. Terence Wan, and it is able to detect capsaicin easily and quickly. Capsaicin is a derivative of the chilli pepper plant. Previous to the competition all legs of the show jumper horses were examined, but nothing unusual was found. The blood and urine samples, though, show that the horses test positive to doping.

Paul Farringdon, a member of the veterinary commission, said that although capsaicin has always been banned, it is only in the last two years that the technology has been developed to detect it because it disappears quickly from a horse's system

The most shocking news of all is that so far only 15 show jumping horses have been tested and four of them were positive. That is a little under 1/3 of the horses! The doping tests are carried out randomly but horses ranking high are more quickly tested than others. The FEI has announced that more horses will be tested after the individual finals.

FEI vice president Sven Holmberg stated that, "This is obviously a serious blow to the sport and we are well aware of its implications for the future in the Olympics." He added, "I think there tend to be more positive cases in show jumping because it is a bigger sport with more prize-money at stake."

Of the twenty horses tested both in eventing and dressage, none of them were positive.

Holmberg was also very concerned that all horses tested positive for the same drug, which indicates a trend amongst show jumpers who use this product they believe is undetectable.

The FEI provisionally suspends all competitors who test positive in doping or positive medication cases at the Olympic Games in the interests of the integrity of the sport.

Christian Ahlmann was notified of his suspension yesterday evening (Wednesday, 20 August) further to receipt of the test results by the FEI from the Hong Kong Jockey Club Laboratory yesterday afternoon.

A preliminary hearing was held at 10h00 this morning (21 August) before a member of the FEI Tribunal who confirmed the suspension.

The other riders - Tony Andre Hansen, Bernardo Alves, Denis Lynch - were notified earlier today (21 August) further to receipt of their positive test results this morning. All three of them were provisionally suspended.

Preliminary hearings were held with the respective National Federations in the following order: 14h00 – Brazil; 15h00 – Ireland; 16h00 – Norway. The hearings were held before a member of the FEI Tribunal who confirmed the suspension.

Confirmatory analysis of the B-samples will be carried out very shortly according to the accelerated procedure in place for the Olympic Games. Upon report of a positive B-sample result, evidence and written submissions will be requested from the rider, and a three member panel of the FEI Tribunal will be appointed. This panel should take a decision as to the applicable sanctions as early as possible further to the accelerated procedure, and providing for a hearing to be held as necessary. The competition results will be amended as indicated in the Tribunal’s final decision.