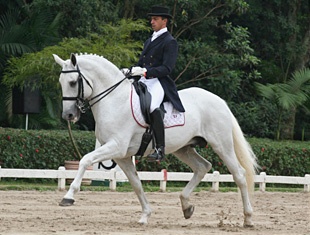 Following in the footsteps of Rogério Clementino’s Nilo VO and Luiza Tavares de Almeida’s Samba, who had already achieved the qualifying standard at earlier events, Oceano do Top completes the Brazilian team of Lusitano stallions that will carry their team’s national colours in Hong Kong in August.

Silva and Oceano do Top’s first 64+% score came in Lipica, Slovenia two weeks ago and now, in Mierzin, they stamped their passport to the Olympic Games with a 65.208% awarded by French judge Isabelle Judet, and 64.375% from Poland’s Wojetek Markowski.

“This was our last chance to qualify for the team. I was very calm. It was all or nothing – like arriving at the end of a championship football match and having to score penalties,” said Silva.

Ironically, although their relationship began when Clementino was working as a stable boy and Silva became his first instructor, there is no love lost between the two riders on a football field!

Even before the Games begin … 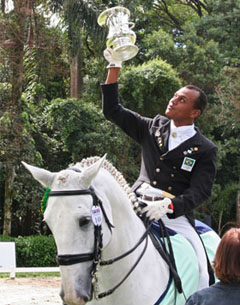 • Dubbed the “Black Knight”, Rogério Clementino will be the first African-Brazilian in Olympic history to compete in an equestrian discipline.

• All three competitors will be riding pure-bred Lusitanos, two of whom, Oceano do Top and Nilo VO were bred in Brazil. Oceano was born at the stud farm of Tonico Pereira where he was raised and trained. In 2007, Pereira and the horse’s co-owner, Jose Robert Guimarães, trainer of the Brazilian women’s volleyball team, were persuaded to present the horse at the 10th International Lusitano Auction organized by Victor Oliva (owner of Nilo VO) at Ilha Verde stud farm – where he was purchased by advertising executive Paulo Salles.

• Luiza Tavares de Almeida (16) will be the youngest ever Olympic competitor in an equestrian discipline. Until now, this distinction has been held by Canada’s Christilot Hanson-Boylen, who competed in Tokyo 1964 at the age of 17, and a Columbian dressage rider (unconfirmed) who competed in Seoul 1988. Tavares’s fellow countryman, Rodrigo Pessoa, currently holds the record as the youngest ever Olympic showjumping competitor at the age of 19.

Responsible for the health of the selected Lusitano auction horses, veterinarian Dr. Neimar Roncati was overjoyed with the results of his wards and said, “It is a little-known fact for Brazil, but these horses show the courage and the heart of pure Lusitano blood.”

The whole group will now return to the yard of Brazilian team trainer Johan Zagers in Düsseldorf before the horses enter mandatory quarantine in Aachen, Germany on July 7. The Brazilian athletes and their horses will travel to Hong Kong on July 28, in preparation for the dressage classes that begin with the team Grand Prix competition on Wednesday, August 13.

Who is Leandro Aparecido Da Silva?

He was the only dressage rider to represent Brazil at the 2003 Pan American Games in Santo Domingo, Dominican Republic. 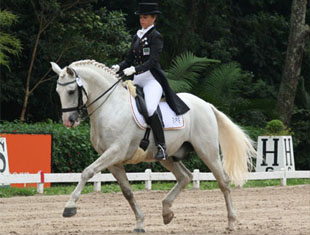 Thirty-two years old, he is a professional rider at the Santa Izabel stud farm owned by advertising executive Paulo Salles.

Passionate about horses since he was young, Leandro became inspired by riders local to Itapuã, São Paulo, such as Spain’s Antonio Cotan. When Cotan saw the boy’s versatility with horses, the Spaniard encouraged him to dedicate himself to equestrian sport, an activity that Leandro transformed into a profession at the age of 19. As a rider and trainer, Silva has worked with many of Brazil’s well-known Lusitano breeders, including Enio Monte, Maria Besenbach, Rubens Ermírio de Moraes, Victor Oliva, Eduardo Fischer, and now as head of the Santa Izabel stud farm.

In international competition he was team runner-up at the World Championship in Working Equitation in 2002 in Portugal, where he finished eighth individually.

At the beginning of 2003, Silva passed one season in Mexico giving riding lessons, and that same year competed for Brazil in dressage at the Pan American Games.

He returned to Brazil in 2004 and has regularly been on the podiums at dressage events.

Who is Ocean do Top? 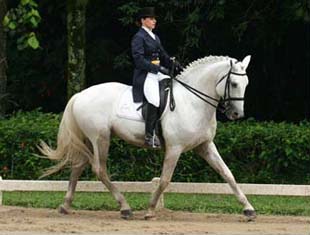 Ridden by Leandro Silva, the 14-year-old Oceano do Top has been one of the most successful Brazilian-bred Lusitanos in history.

Under the saddle of Sandra Smith (pictured), he was a member of Argentina’s dressage team at the 2007 Pan American Games in Rio de Janeiro, and holds a number of dressage titles, including victories with Canada’s Alexandra Wilson. During the 2004/2005 two-year period, he was ranked as one of the two best sport horses in the Lusitano breed, and won the 2005 Troféu Eficiênca for a special equitation series organized by the São Paulo Equestrian Federation.