Lone Jorgensen Not to Compete at the 2008 Olympic Games 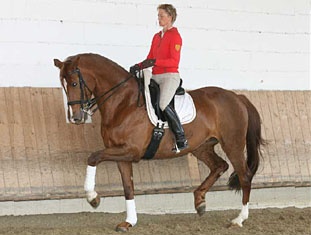 Jorgensen opines that her mare is too young for the heavy competition and strenous transportation to the 2008 Olympic Games in Hong Kong.

"I have been thinking about the Olympic Gales the last two, three months but decided to withdraw," Jorgensen told Eurodressage. "I think Asana is still too young for this. She is only 8-years old with no experience in going by plane, being away for five to six weeks and then, of course, the stress of the competitions in Hong Kong. She has got such big potential and has been doing everything until now without any pressure, so I don´t want to overtax her."

Though Jorgensen was ensured of a team place by the Danish Equestrian Federation based on her high qualification scores, she will not go to what would have been her third Olympics.

" I would like to prepare Asana for the European championship next year in Windsor, if we feel that is okay for her," Jorgensen commented. "Of course it would have been great to go for my third olympic games with 3 different horses, but not at the cost of the horse´s health or what is also very important, at the cost of her mind."