Blue Hors Matine Not to Compete at the 2008 Olympic Games 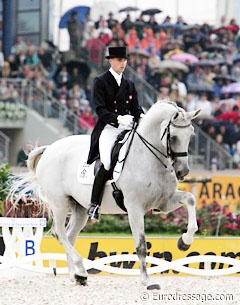 Andreas Helgstrand will not be riding Blue Hors Matine in the 2008 Hong Kong Olympic Games. Blue Hors stud manager Esben Møller notifed the Danish Equestrian Fedeation that the grey Danish Warmblood mare is not fit enough for the Games.

The decision not to show Matine (by Blue Hors Silvermoon) was made in agreement with the veterinarians. They detected damage to the tendon connected to the fetlock bone (suspensory ligament) and this still hasn't fully healed.

"The risk is simply too big," Andreas Helgstrand commented."Scans showed that she has not healed 100% and that means I can't train her to the highest level, to Olympic Games strength. This is naturally annoying, but we are urged to wait. She is only 11-years old. If I push her now, I run the risk to have a horse at half strength in Hong Kong. That's no good for anyone."

Esben Møller added, "We have to think about Matine's wellbeing. If she can be in top shape at the Olympics, she can be a clear candidate for the medals. We simply can't take the chance to ride her there while her condition is not totally stabile. We want to stay realistic. The next three months are incredibly important." 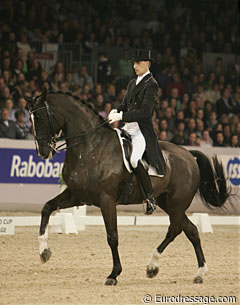 Andreas Helgstrand is certain of individual Olympic qualification and will select his World Cup Finals' horse Gredstedgaards Casmir (by Continue) for the Gales. "I still have Casmir," Andreas Helgstrand commented."He is despite his young age one of the best horses in the world. I now want to concentrate all my energy on him."

Møller believes that the pressure on Helgstrand is much bigger now after having won an individual silver medal at the 2006 World Equestrian Games. "With Matine we experienced steady growth from May till the 2006 World Championships in August. The situation with Casmir is different. On paper, Casmir has produced many more results than Matine had in the same point of her career. But there is totally different focus on Andreas now. When he won the silver, he came from the sidelines and was the outsider. Today, expectations of him are collosal. The underdog position fits better with the Danish mentality. But if anyone can handle the pressure, it is Andreas and Casmir."