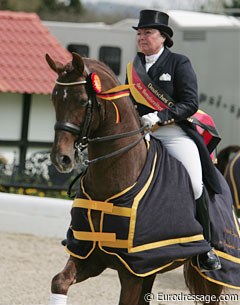 Lady of the house Bianca Kasselmann won the 2008 German Championships for Professional Dressage Riders. Hosted at Hof Kasselmann in Hagen, Bianca earned her ticket for the finals' test by placing second in the Grand Prix and winning the Grand Prix Special.

Aboard the 15-year old Forum Zwei (by Full Speed x Parcours), Kasselmann claimed her first Profi Champion's title. Forum Zwei has built up quite an international career. He competed at the 1999 World Championships for Young Dressage Horses under Christoph Koschel and later on appeared back on the show scene under Dutch young rider Diederik van Silfhout. Forum Zwei is now owned by Hof Kasselmann who has this Grand Prix schoolmaster up for sale.

The silver medal went to the incredibly talented Stefanie Kerner on the 17-year old Westfalian bred Rittersport Las Marismas (by Royal Angelo). Kerner is coached by Dr. Ulf Möller's wife Eva Nolden-Möller and shows tons of softness and feeling on her horse. In a way it was a pity that she did not win the gold medal because Kerner rode three textbook tests in which the soft contact with the bit with all three horses was a pleasure to watch. 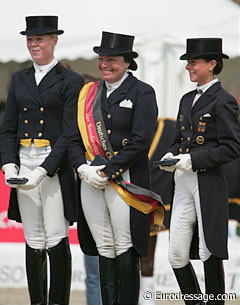 The bronze medal went to the petite Julia Katharina von Platen, who has earned her marks as an international junior/young rider and as a young horse trainer. She competed several ponies and horses at the Bundeschampionate and at Hof Kasselmann she presented Madeleine Winter-Schulze's Capuccino D (by Classiker). Coached by Isabell Werth, von Platen showed well on her own horse and Rittersport, but had some mistakes with the massive Forum Zwei who kicked to her spur.