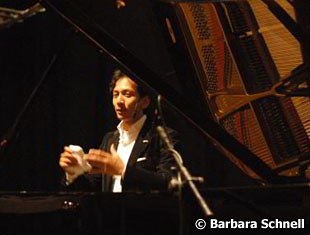 When he performs in a normal concert hall, Dutch piano star Wibi Soejardi is surrounded by security guards to shield him from his many devoted fans. At the Academy in Hooge Mierde, there was no barrier between him an the audience

, and he talked about the genesis of his medal-winning freestyle music for Imke Schellekens-Bartels with a joy that was catching and irresistible. Movement for movement and bit by bit he explained the ingredients of his composition, titled “The Spirit of Sunrise”.

Later, Imke and Sunrise joined him to ride selected bits, accompanied live by Wibi on his grand piano, and then a video showed the whole freestyle as performed at s'Hertogenbosch. 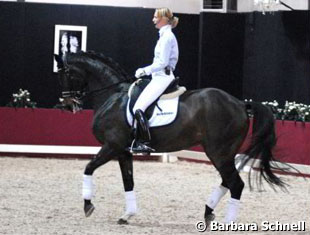 There may be more sophisticated freestyles around right now, but this was a wonderful example of  smooth and thoughtful beauty that is the result of skill paired with enthusiasm.