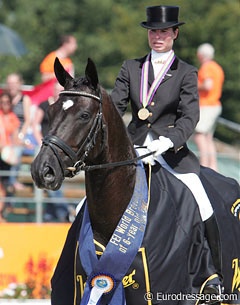 The black Oldenburg gelding Deveraux OLD became the new World Champion in the 6-year old division at the 2007 World Championships for Young Dressage Horses in Verden, Germany, on August 5, 2007. Under the Dutch rider Miranda Rongen, Deveraux put a spell on the judges

with his superbly cadenced trot, ground covering walk with great reach and freedom in the shoulder and his good canter, which could have been more uphill and engaged from behind. There was one small problem with the third flying change. Rongen's test was eye candy because of the lightness of the contact, the lovely frame which was maintained throughout the test and the top quality paces of her horse.

The judges praised Deveraux' trot for its lovely swing and metronomical rhythm. The walk had huge overstep and the pirouettes in walk were well executed. According to judge Katharina Wust who spoke for the judges' panel, the canter was forwards, well collected and the weight was well carried by the hindquarters. The steady contact with the bit was recognized as well as the throughness through the body. 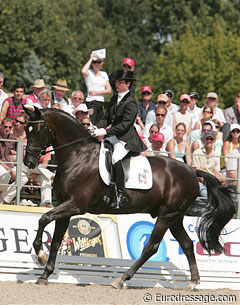 The judges scored the trot 9.0, the walk 8.7, the canter 8.9. Rongen and Deveraux were the best pair of the day with a total score of 9.1 they won the class, but the judges' mark of 9.5 for submission and general impression was generous compared to other outstanding rides in that finals class.

The young Miranda Rongen, whose sister Simone Rongen was the former European Junior Rider Champion, was ecstatic about her gold medal but very reserved in expression her joy during the press conference. "It's a great feeling. He went so well, he was totally loose in his body."

Deveraux is owned by Miranda's father Harry and is bred by Auguste Berding. He's by De Niro out of a Rohdiamant dam. Miranda and her black gelding have been in training with Rocco di Piero for four months. 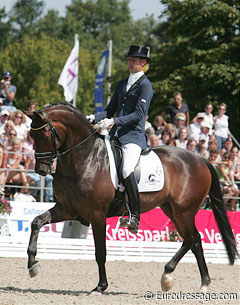 The silver medal went to another delightful horse, Freebird Ucelli T. The KWPN branded gelding (by Olivi x Gribaldi) has a beautiful trot with much engagement and bounce, but at times was too passagey and could cover more ground, especially in the extensions. The final extension lacked in overstep and ground cover, but the judges did not seem to have noticed that when they referred to it. The walk was nice with lots of shoulder freedom but there was a slight loss of rhythm. The canter work was really good, but could have been more uphill and the horse sometimes was a bit tight in the neck, especially in the bends.

"I was very happy today," Minderhoud said at the press conference. "I have been riding him for a year now. The first few days he was a bit sensitive but today he went really nice. I'm really happy to end with a silver medal," said the quadruple World Champion gold medallist.

The bronze medal went to last year's 5-year old World Champion Uzzo (Lancet x Indoctro). Under Patrick van der Meer, the bay KWPN gelding showed much progress since one year ago. Especially the trot work has improved dramatically. It was absolutely superior in its rhythm, bounce, and ground covering. The walk was good but a bit hesitant in the collection. The canter work was nice, but not always clear in its 3-beat rhythm. The flying changes were outstanding but the tail could be steadier in the change itself. 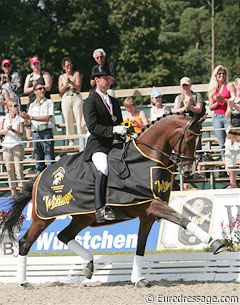 Van der Meer, who runs an dressage stable in The Netherlands with his wife, was very happy with his bronze medal. "I did a really good test. This test [the Finals] is a little harder to ride. There was a little tension in the walk and canter, but I am very happy with him. Winning a medal on this championship is really great."

There was some controversy in The Netherlands about Uzzo's selection for the Championship. The pair only rode one selection trial and was unable to perform at their best in extremely muddy footing. This seemed to have made the committee doubt the horse's potential. The KWPN announced Uzzo's qualification only days before the closing date for entry. A little bit of faith in the horse produced a bronze medal for the KWPN.

Short of a medal but finishing in a very respectable fourth place were Wolfhard Witte and the Celle state stud owned Rascalino (Rotspon x Velten Third xx). The black Hanoverian licensed stallion showed a lovely, rhythmical well ridden trot but the contact with the bit was sometimes phlegmatic and the horse tilted the head in the traversal movements. The walk was good, the canter delightful, especially because of Rascalino's great ability to collect and take the weight on his hindquarters.

Finishing fifth with only 0.02 points less than Rascalino was the Swedish warmblood stallion Hermes (Rambo x Urbino) under Anne Svanberg. In trot, the cute chestnut moved very actively with a well engaged hind leg but he could have been more collected in general. The walk was large and clear in rhythm, the canter expressive and off the ground. Three out of four flying changes were superb. The judges rewarded the combination with an 8.2 for trot, 8.8 for walk, and 8.2 for canter. Judge Katharina Wust praised the beautiful presentation of the horse free of tension. Even though Hermes was very expressive in his gaits, his ears were constantly pointing backwards and the horse looked sour. They scored 8.38 in total and placed fifth.