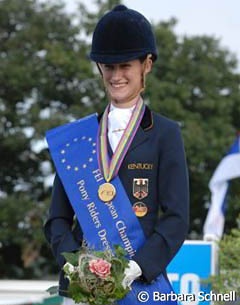 Germany’s Louisa Lüttgen aboard Dornik B is the 2007 European Pony Dressage Champion on the record-breaking highest ever result of 77.35% (the previous record - 76.97% - had been set in 1996 by another German, Jana Kun, riding Golden Dancer).

Rider and pony are of the same age – 16 years – and the pony can boast more than a long list of awards. Indeed, this is the seventh European team and the fourth individual medal for this stallion. A star in the arena, he is also well used to prize giving ceremonies where he bows with condescension to the applauding crowd.

The silver is also German and so is the bronze. Indeed, Carlotta Hassenbürger on Dulcia 4 finishes on 74.6% and is followed by Sönke Rothenberger, who at not yet 13, is one of the youngest participants in this year’s championship and scores 73%. Sönke rode Deinhard B, the very own son of Dornik B, today’s gold medallist, and Golden Dancer, the record-breaker of 1996.

2007 is also a year of innovation for Dressage. Among the 15 pairs that took place in today’s individual final, were allowed only three riders from the same country. This selection is done is order to ensure that the best riders representing the largest number of countries possible take part in the final. The selection was done by the chefs d’équipe. 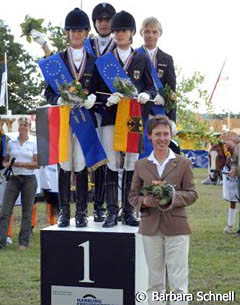 The Team Dressage medals were decided after a Preliminary competition, which was the highlight of Wednesday 18 July, and a Nations Cup of the highest quality involving the following ten teams: Belgium, Denmark, France, Germany, Great Britain, Italy, the Netherlands, Norway, Poland and Spain. After their Junior and Young Rider counterparts defended in style the national colours at last weekend’s Championship at Nüssloch, German pony riders proved that the future of national Dressage is in safe hands. They won the team gold for the 18th time in a row with a result of 223.68%. Indeed, ever since Pratoni de Vivaro (ITA) in 1990, have German ponies kept the European gold firmly at home. With all the riders scoring above 72%, the German team is a comfortable 12.63% ahead of runner up … the Netherlands (211.05%). Great Britain take home the bronze (203.26); the fourth-placed Denmark miss the podium for a tiny 0.63%.

It was a great day for Carlotta Hassenbürger, who not only wins her first European team gold, is in the lead individually (75,790%), but also celebrates her 14th birthday. It may be a first for Carlotta, but not so for her 10-year old mare Dulcia 4, who was on last year’s European team partnering with a different rider (Lydia Camp). 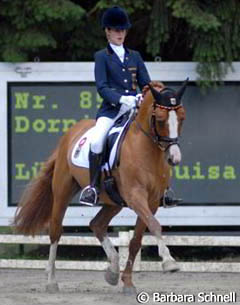 Sixteen-year old Louisa Lüttgen, 2nd individually with 74,947%, is much more experienced. The younger sister of a Anna-Katharina Lüttgen, a Grand Prix level Dressage rider, she was on the winning team in 2005 and 2006 and is celebrating today her third gold medal. Her 16-year stallion Dornik was already a team champion back in 2000. This is the last year for Louisa on the pony circuit; next year she will be making her entrance at the Juniors level.

The remaining two members on the German team, who are 3rd and 4th respectively, are 13-year old brother and 15-year old sister Sönke (72.947%) and Sanneke (72.684 %) Rothenberger, the children of German-born Sven Rothenberger, who now competes for the Netherlands, and Dutch rider Gonnelien Rothenberger-Gordijn. Sanneke, who was on the 2005 and 2006 teams and who won Individual silver in 2005, is riding the 17-year old veteran Konrad who has brought to success five riders before her. The 1997 and 1999 Individual champions Nicholas and Kira Kröncke respectively had Konrad as their partner. Not only are the Rothenberger children excellent riders, but they are also good linguists. Students at the Frankfurt International School, they are already fluent in German, Dutch and English.