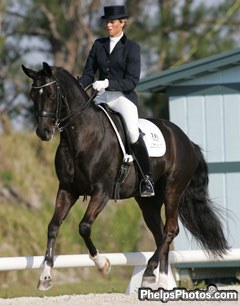 Up first for the three disciplines contested in the Pan American Games was dressage, and there was one American to take to the arena—Lauren Sammis. At the end of the 13 riders going on Saturday (one from Columbia withdrew), she sat in the early lead headed into Sunday’s Round Two that will see the other two American teammates—Katherine Poulin-Neff and Christopher Hickey—put down their scores in hopes of bringing home a Team medal for the U.S.

Today’s competition not only served for the Team Final in dressage, but also as part of the Individual Qualifier. All three American riders have high hopes of making the cut to compete for an Individual medal to be awarded on Wednesday.

Sammis and her mount entered the sun-soaked arena just after the morning’s first break and looked confident aboard her eight-year-old Dutch Warmblood gelding Sagacious HF. And with a vocal contingent of her fellow Americans in the stands, she had to be pleased with the support she received. This was her debut performance at the Pan American Games, and international competition in general.

It was a strong debut effort for the rider from South Orange, New Jersey. Both horse and rider seemed controlled and confident and scored a 70.200%.

“I’m pleased…really pleased,” said Sammis who began riding Sagacious HF last year in January. The ride seemed to go without any hitches, with the exception of a fleeting moment when Sagacious HF seemed to spook as workers were walking behind the judges’ stand. But, this is not a “spooky” horse, so he put it out of his mind and kept on with the work before him.

What was the best part of Sammis’ ride today? “The end!” she joked. “My second shoulder in was quite nice. I was a little bit of a passenger for the first shoulder in. In all, I just feel so blessed to ride this horse that I just enjoy every minute of it. I just know that it is a gift.”

Sammis said that over the last few days she had not felt so secure in his changes, but they were definitely secure enough today according to the score awarded by the judges.

“Over the last couple of days, I’ve not felt so secure in them,” she said. “I did one line of changes today before I went in, and he, in the ring, always pulls through on them. Now that he knows it, I don’t mess with it very much.”

As the first rider representing Team USA, Sammis knew that she would not only be setting a standard to build upon, but giving the international panel of judges a first taste of what the Americans brought to Rio. She would also be giving them a first impression of what she can do in the ring.

“I went in there today to give the judges and impression of what we [the team] are going to be,” she said. “Also, they [will] know that the U.S. in bringing out all the guns, and we are here for real.”

“One is to ride for Judy Guden [of Hyperion Farms], who has breast cancer, and to ride for her means more than riding for any international judges here,” she said. “And, I love the opportunity of riding on the international level. It’s something that you dream about from the time you start riding…making a team. In reality…I ride for the people that are in my life.”

Day Two of dressage starts on Sunday morning at 9 a.m. and the two remaining American riders will add their scores to the American count. At the end of tomorrow’s competition, the Team medals will be awarded.

Back to the Pan Am Index