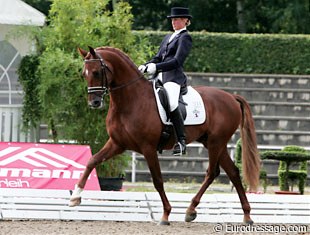 Impuls and Hermes were the winners of the first Swedish selection trial for the 2007 World Championships for Young Dressage Horses in Verden, Germany, in August. Held in Flyinge, Sweden, the trial was the first out of two for Swedish riders to qualify their horses for Verden.

The winner of the 5-year old Dressage Horse division was Impuls (by Master x Chapman). Under Anna Svanberg, the licensed stallion won the class with 81%. Pernilla André and Brazil (by Briar x Weltmeyer) placed second with 79.6%. Susanne Gielen and the licensed stallion Highlander (by Hohenstein x Hill Hawk xx) landed a third place with 77.6%. Fourteen horses in total were entered in this 5-year old division.