Ann Kathrin Linsenhoff Retires from Competing Due to Health Issues 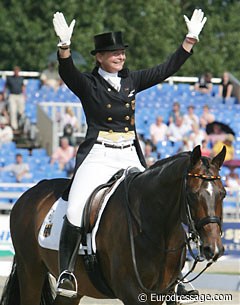 "This is an unbelievably heavy decision for me," Linsenhoff said. "Never before did I have such good horses as now." Linsenhoff will not sell her horses, but continue to ride them at her stable Schafhof in Germany. It can be expected that stepson Matthias Alexander Rath will take over the ride of a few of them.

Linsenhoff suffered from Lyme disease this winter, which caused her to have heart arrhythmia and severe fever. Since they discovered the cause of her feeling ill, doctors were able to treat her and her condition improved tremendously. Linsenhoff announced her come back to the show ring with Wahajama and Sterntaler, stating that she would compete at the Horses and Dreams show in Hagen, Germany, April 27 - May 1, 2007. 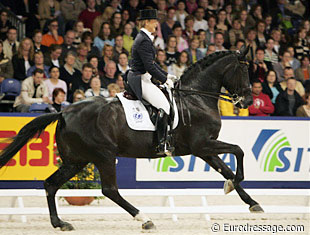 Unfortunately, these plans as well as her future show career have come to an end. Doctors have recommended her not to strain herself and they advised her not to submit herself to the physical exertion of a professional show career out of fear for returning health problems. Though Linsenhoff will no longer show, she will not give up the Unicef project and continues to raise money for children of third world countries.