Cinderella Withdrawn from 2007 World Cup Finals due to Eye Tumour 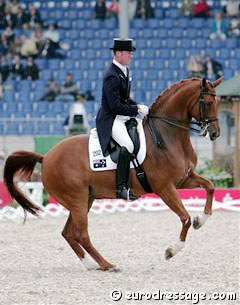 The Pacific League World Cup Final winners Matthew Dowsley and Cinderella have withdrawn from competing at the 2007 World Cup Final in Las Vegas, U.S.A. A few days before taking part in the western league final CDI-W qualifier in s’Hertogenbosch, the Netherlands

, Cinderella was diagnosed with another growth attached to her lower right eyelid. Fortunately, the tumour, which is growing rapidly, has been tested and it appears to be benign.

Veterinarians have advised Australian rider Matthew Dowsley and Cinderall's owner Claudia Harper against going to the World Cup Dressage Final in Las Vegas, to avoid further stress and to be able to start treatment immediately. Matthew will seek additional specialist advice this week. Because of the rapid growth of the tumour, it is likely that surgery take place within the next few days.

Matthew, Cinderella’s owner Claudia Harper and their support crew are extremely disappointed about not being able to participate in the Final, but the welfare of the horse is uppermost in their minds.