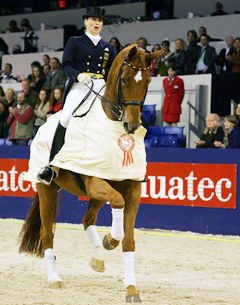 All competitors in the last Western-European Qualifier for the FEI World Cup™ Dressage rode like they had already entered the Final to give their best. “It was an amazing group of riders indeed with amazing Final-worth performances”, the chairman of the judges Dutch Ghislain Fouarge

who was recently mentioned in the team of the judges for the Olympic Games 2008 agreed.

Two qualifiers ago in Neumünster Isabell Werth rode her best Freestyle ever, rewarded with 83,60%, now at probably “the best indoor World Cup™ Qualifier ever in ‘s-Hertogenbosch” as she called the Indoor Brabant Horseshow, she received 82,40% for her winning test.

“I am most happy with Hannes, who was very concentrated and in a powerful shape. The piaffe and passage went better than in Grand Prix and apart from the little unevenness in the extended trot and apart from his anxiousness to stand still at the final halt, I have no comments”, Isabell said. Highlights again were the piaffe and passage and the fitting variety between the half passes in passage and in collected trot.

The worst problem Isabell had to cope with in ‘s-Hertogenbosch had been the dark-red-coloured carpet in he stables which Hannes refused to pass. Stewards took care for a lane of sand over the carpet to direct Hannes from the stables into the practicing arena. “No carpets in Las Vegas I’m sure”, Isabell smiled.

Amazing for the eye also was the grey mare Blue Hors Matiné partnered by bronze medallist of the WEG in Aachen 2006 Danish Andreas Helgstrand. The movement power in the foreleg is almost incredible, like is her strength and power. The enthusiastic audience all rose when the big passaging Matiné came by when leaving the arena. For the audience there was no hesitation to decide for the winner! However Andres Helgstrand was too happy being the runner up: “This is the best indoorshow I have been until now and I am most happy with the performances of Matiné, who has been sufferering from an injury. Now she is fully back and I definitely plan to bring her to Las Vegas for sure”, Andreas Helgstrand said. Good news for enthusiastic Helgstrand and other competitors that gave their compliments to the 40 year old Indoor Brabant Horseshow is that the organisers applied for the FEI World Cup™ Dressage Final in 2008.

Swiss Silvia Iklé only rode her third World Cup™ Qualifier and reached with her brilliant piaffes and passage of 13 year old Salieri the Final of the FEI World Cup™ Dressage. However it was with a sort of sadness that she said that both the Swiss Equestrian Federation and her trainer had decided not to compete in Las Vegas. “For the Swiss team the Olympic qualification to reach for at the European Championships in Italy is the main goal for 2007 and Salieri and me are part of that goal”, Silvia Iklé explained.

‘To go or nor to go’ to the Final in Las Vegas was more or less the most important question the competitors had to deal with after the dressage. For Dutch Edward Gal, reaching the fifth position with a strongly ridden test partnering black stallion Gribaldi, the answer was easy. “Of course I’ll go and I am going to win”, the runner up of the FEI World Cup™ Dressage Final in 2004 and in Las Vegas in 2005 partnering Lingh said with his positive humour.

Jan Brink ended sixth with Briar and still has to make up his mind yet, as also Sweden still has to earn its Olympic qualification. He will decide after having checked his vet and the healthiness of 16 year ld Briar at home. The same counts for Finnish Kyra Kyrklund. Partnering Max she was the last to go. Highlights were her transitions and the cheerful and sunny looks of the test and horse and the pair ended fourth.

Bad luck occurred to Laurens van Lieren as he had to withdraw his chestnut Hexagon’s Ollright due to a slight injury. However, not competing in the Final is not into question, he assured.

Winner of Neumünster Isabell Werth partnering her chestnut Warum Nicht FRH won the World Cup™ Qualifier in Maastricht, Neumünster and now ‘s-Hertogenbosch and was the runner up at London-Olympia. She moved forward to shared winner’s position now in the Western European League with Imke Schellekens-Bartels.

Next Tuesday March 27th the Dressage Committee will decide for the wild cards that will be presented for remaining places in the Final. German Ellen Schulten Baumer who suffers from the loss of her Lesotho has already decided not to travel to Las Vegas. An unfamiliar position for Isabell Werth to be the only German representative in the World Cup™ Dressage Final. “It’s like I come from a developing country”, Isabell joked.