Imke Schellekens Not to Compete at 2007 CDI-W 's Hertogenbosch 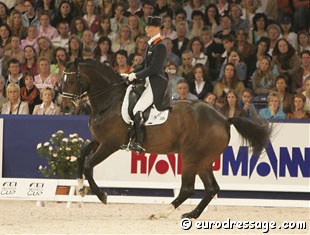 Imke Schellekens and the Hanoverian mare Sunrise have withdrawn from competing at the CDI-W 's Hertogenbosch next weekend. A minor injury has sidelined Sunrise for a while and, though the mare is back in training, Schellekens wants to take no risks.

The show in Den Bosch is the final Western League world cup qualifier before the Finals in Las Vegas in April.

In agreement with the veterinarian, Schellekens will not be showing the Singular Joter mare before the Las Vegas Finals. The pair is currently leading the Western League World Cup Standing and wants to go for the victory at the Las Vegas World Cup, which in the absence of title defender and World Champion Anky van Grunsven.

Schellekens' biggest rival at the World Cup Finals will be Isabell Werth and Warum Nicht FRH, who have also set their mind on the title.