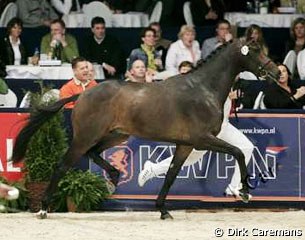 Zagreb, the Champion of the 2007 KWPN Stallion Licensing, achieved the new record selling price at the KWPN Select Sale, the auction of licensed and non-licensed stallion following the licensing in 's Hertogenbosch, The Netherlands.

In a tough bidding duel between buyers from Denmark and the U.S., it was stable manager Esben Möller of the Danish Blue Hors Stud who ended up with the horse. The knock down price for Zagreb was 430,000 euro.