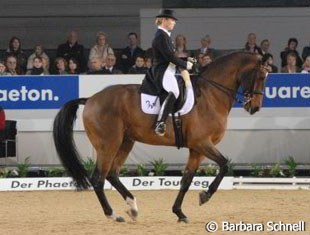 German correspondent Barbara Schnell was at the 2007 CDN Munster to capture photos of the fun and action at the show. Even though Isabell Werth only placed sixth in the Special (after her second place in the Grand Prix) she was very happy with Apache

, who was very easy-going in the Pi-Pa-tour, usually not his forte, and especially showed some very nice piaffe work. Unimpressed with her ranking, Isabell only expressed her gratefulness for this big step ahead.

"I'm not giving away any secrets when I say that the last two shows haven't been so great for me and Elvis", said Nadine Capellmann, who fell victim to technical difficulties in Frankfurt but had also had trouble with Elvis' inconsistency in both Stuttgart and Frankfurt. "We wanted to show in Muenster that this isn't a lasting problem, and we succeeded. Saturday's Grand Prix was the best I've ever ridden with that horse, I think. The Pi-Pa-tour has been our big obstacle, and we've put that behind us." After an indeed superb Grand Prix, which the pair won with over 76%, they also dominated the Special despite an obvious mistake in the flying changes between the two pirouettes. "My mistake", apologized Nadine. "I didn't collect him enough after the first pirouette, and he just didn't know what to do." Still, again, the trot and Pi-Pa-tour had been grand enough to make up for that. Coach Holger Schmezer also expressed his relief at this boost for the rider's self confidence. 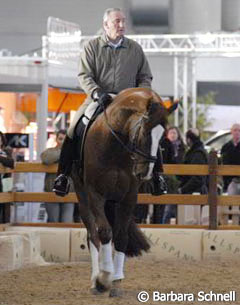 It was a rare sight in public: Klaus Balkenhol on horse back. Klaus is riding Dablino, the young Hanoverian that competed at the 2006 World Championships for Young Dressage Horses under Holga Finken. The horse is now being ridden by Anabel Balkenhol. After Dablino (the horse her father is riding on the other picture to help him get used to event surroundings) completely let her down on Thursday, Easy made it very easy for Anabel Balkenhol in the Grand Prix. The pair presented a lovely, light-footed (and handed) round and qualified for the Special.

Matthias Alexander Rath won second place in the Special and more than made up for his mistakes in Frankfurt. At the press conference, the first thing he did was thank his horse for his highly sucessful first Grand Prix season.