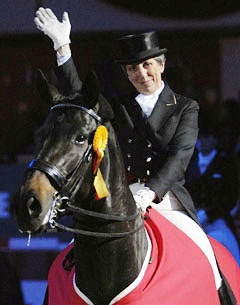 There was no doubt about the winner in Frankfurt: Swiss Silvia Ikle! The 57 year old experienced rider was over the moon by her undoubted wins. “I am more than happy!”, Silvia Ikle expressed.

“This was my very first appearance with my brand new Freestyle especially composed by famous Swiss composer Bauer from Bern, with especially played bandoneon music by Zisman. I was too happy with it already, but now I am even more happy that Salieri did so well and grateful for the appreciation of the judges and the audience here in Frankfurt.”

From her ride in the Grand Prix yesterday to her ride in the Freestyle today Swiss Silvia Ikle and Salieri showed an outstanding quality. The harmony that marked the tests could not have been better. Swiss international judge Beatriz Bürchler-Keller commented: “I have never seen the pair like this, it really was outstanding. It really opened the hearts!” 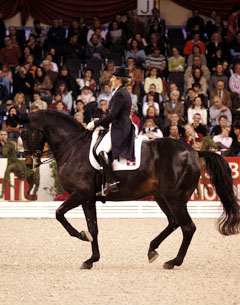 In the new Freestyle the high degree of difficulty with the half passes in passage, followed by a piaffe pirouette and half passes to the other side could be marked exceptional high by the judges. “I have one word: the piaffe and passage in this way showed was unique”, Beatriz Bürchler said. Silvia Ikle had been qualified for the FEI World Cup Final™ in Las Vegas in 2005 but she refrained from going because of the distance and the flight. Now Silvia Ikle probably reconsiders a possible qualification for the World Cup Final™ after having competed in her second qualifier in Amsterdam in January.

The average quality of the FEI World Cup™ Dressage in Frankfurt again was high.

A remarkable runner up position could be reached by young German talent Sonja Bolz who took over the ride of Cockney from Nadine Capellmann one year ago and really did very well.

However Nadine Capellmann herself experienced some problems. In Grand Prix Elvis VA was not happy in the piaffe. In the Freestyle he seemed to be in a good shape again, but now the musical cd started with disturbances and scratched. When after an intervention and pause it happened for the second time, Nadine Capellmann decided to give up. She took it like a lady, however it was unlucky not to have provided a second cd, something which cannot be neglected with the real strong contenders and increased efforts of all nowadays. 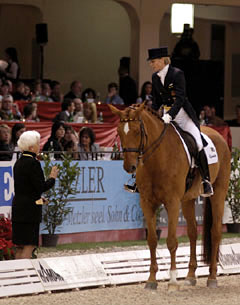 Another unlucky incident happened to Isabell Werth aboard Polano. A missed left canter pirouette caused a serious drop of her points.

Ellen Schulten Baumer did very well in Frankfurt once again riding her mare Donatha S in the Caribian styled Freestyle. A small mistake in the two tempi changes still leaves room for improvement. The student of economics makes up her mind to chose for dressage only, having the ride over 9 horses at the moment. “My mind is too much into horses to leave room for economics”, Ellen Schulten Baumer said. “As I was the fifth and reserve in the German team for the WEG this year, I would be too happy to get qualified for the World Cup Final™ in Las Vegas and will happily decide for a future into horses now”, the leader of the standings commented.