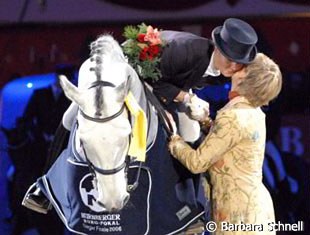 "During the season, we won the preliminary round, but never really the qualifier for the finals. I was really happy that we were asked to compete in the big Finals anyway. Winning the Burgpokal Finals is a new milestone for me," Carola Koppelmann said.

Comic Hilltop FRH is a licensed Hanoverian stallion owned by the American stallion station Hilltop Farm. The grey stallion is show jumping bred, being sired by Come On and out of a Platon dam, but his dressage talent was obvious from an early age. Under Ingrid Klimke, the stallion competed at the Bundeschampionate, LVM Riding Horse Championships and the World Championships for young dressage horses.

In 2005, Koppelmann and Comic Hilltop qualified for the Nurnberg Burgpokal Finals, but were unable to compete there due to an injury. This year, however, the combination captured the prestigious title of Burgpokal winners. "He really wants to show what is in him," Koppelmann stated.

The reserve champion was the Trakehner stallion Kaiserkult TSF (by Van Deyk) who scored 73.35% under Dorothee Schneider. Helen Langehanenberg and the 7-year old mare Responsible (by Rohdiamant) placed third with 71.85%.