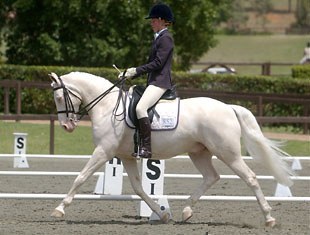 An exciting new competition has been added to this year’s National Dressage Championships program. For the first time, Australia is hosting an FEI World Cup Qualifier in Freestyle (dressage to music) for Young Riders.

Eight Australian riders have been invited to compete in this final qualifier for the chance to represent Australia at the FEI Young Rider World Cup Dressage Final on their own horse in Frankfurt, Germany in December.

The FEI Young Rider Freestyle test will take place on Sunday morning, 29 October, from 9AM in front of FEI International Judges. The panel includes FEI “Olympic” level Judge Mr Ghislain Fouarge from the Netherlands. Mr Fouarge recently judged at the World Equestrian Games in Aachen, Germany, and is on the short list of judges to judge at the 2008 Beijing Olympic Games.

After the event the Selectors may name up to 3 riders as the short list, only one horse will travel to Germany at the discretion of the National Selectors.

The final in Germany will include riders from Western Europe, Central Europe, North America, South and Central America, Asia, Africa and the Pacific region plus one “wild card” entry.

The FEI aims to foster international competition experience for our next generation of dressage riders and we are hopeful that this will be the first of many opportunities for Australian young riders to compete overseas.