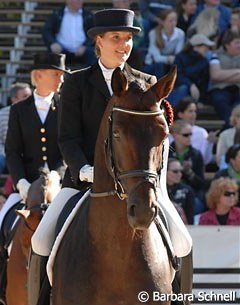 Donavan, the brand new Reserve champion of the 2006 Bundeschampionate in Warendorf, will join his owner Dr. Cesar Parra in the United States end of September for the further development of the stallion's career as an international dressage horse.

In the final round of the Bundeschampionate, Grand Prix rider Carola Koppelmann steered Donavan with much professionalism to a reserve champion's title. The dark bay stallion was praised for his outstanding basic gaits (8.70 for trot, 9.00 for canter and 9.30 for a fantastic walk) and outstanding level of classical training. Donavan was the most consistent performer of all 5-year olds with a third place in the two preliminary rounds and a second place in the finals. The judges praised Carola for her light and steady contact with Donavan's bit. 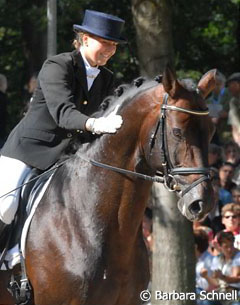 Donavan is bred by Dr. Ursula Mittermayer, who steered Donavan to the title of 2005 German Riding Horse Champion when he was four. At the 2005 CDIO Aachen, Dr. Cesar Parra was approached by Mittermayer who offered the horse to him. A quick look and try-out were enough for Parra to spot world class qualities in Donavan. The then 4-year old bay stallion was acquired by the New Jersey based Parra, but stayed in Germany for further training. Donavan presented his first crop of outstanding foals alongside qualifying for the 2006 Bundeschampionate and winning the reserve champion's title under Koppelmann this year.

Donavan will now travel to the United States, where he will be trained and campaigned by Dr. Cesar Parra. Parra confessed having received multiple six-digit offers for the superb Donavan at this year's Bundeschampionate, but with the help of Anne Whitten and Mary Lou Sparks of Horses Unlimited he was able to contract the horse as a ride for himself and safekeep him for the United States dressage scene. 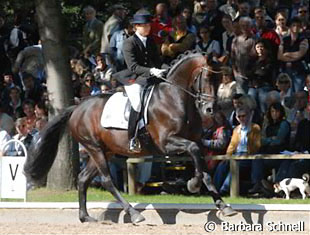 Aboard Horses Unlimited's Galant du Serein, Dr. Cesar Parra competed at the 2004 Olympic Games and 2006 World Equestrian Games. However, Parra makes sure that rising talent is lined up for the future. Donavan will be joining the 2005 Nurnberg Burgpokal Reserve Champion Wild Dance and the former Bundeschampion Furst Fabio at Parra's Performance Farm in Whitehouse Station, New Jersey.