So What Went Wrong with Sir Donnerhall? 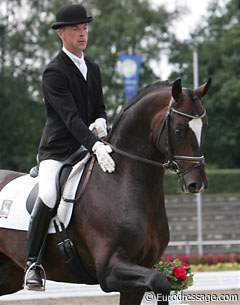 When you looked at the starter's list even before the show had started, you knew that Sir Donnerhall would be the favourite for the gold medal. The gorgeous Oldenburg stallion by Sandro Hit x Donnerhall x Feldherr has been on the path of glory since his licensing in 2003

(he finished third). His foals prove to be outstanding movers, he became Oldenburg regional young horse champion and now the world title was within grabs. Except, something went wrong in the finals.

The movements of the Paul Schockemohle owned Sir Donnerhall are much discussed in the dressage and breeding world. At the Vechta licensing in 2003, licensing committee member Uwe Heckmann said that Sir Donnerhall's trot was one of the best he has seen in the past years. PSI rider Dr. Ulf Möller had much to live up to if he wanted the maintain and develop the reputation of his horse's gaits. Möller announced his retirement from competition last year and would only return unless he had a horse he couldn't say no to. Sir Donnerhall was the one for him. 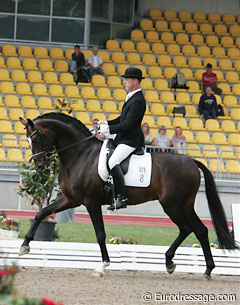 At the 2003 licensing, Heckmann also added that Sir Donnerhall's "croupe needed to develop" too. This is where Sir Donnerhall's "weakness" lies. His flat croupe partly prevents the hind legs from really stepping under in the trot. Sir Donnerhall's hind legs are active and working and they carry the weight, but they need to move more towards the gravitational point.

Don't get me wrong, Sir Donnerhall has an outstanding trot, but this is the controversy (and bias) the horse had to handle going into the 2006 World Championships for Young Dressage Horse.

Sir Donnerhall blew away the competition in the first round of the 5-year old division. The horse was light in the hand, active behind in trot but he lacked bending through the whole body in the serpentine and circles. The walk was good but could have been more relaxed. In free walk, he seemed to make bigger steps with his right leg than his left. The canter work was delightful. Balanced, controled and showing much self carriage. The judges were generous and scored him 9.0 for trot, 9.5 for canter, 8.5 for walk, 9.0 for submissiveness and 9.5 for general impression. The overall mark was 9.10 which put them far in the lead ahead of the Danish mare Treldegards Shantiana. 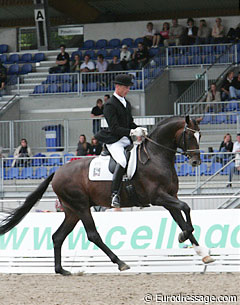 With a victory in the first round, Möller made the statement he was digging for gold in the final round, but he found silver instead. On Sunday, Sir Donnerhall entered the ring unconcentrated and tense. The trot work in the test was ok, but the horse was unfocused and neighing constantly, making it hard to have a balanced, consistent trot tour. In the walk there was tension and he did not show the overtrack he has in him. Then in canter, the bomb burst. Sir Donnerhall made a flying change in the right counter canter which Möller had to correct twice. In the left counter canter he changed again. The audience oohed, Möller knew he lost it but finished his test with much professionalism.

The judges needed some time to decide on the score. They chose to give Sir Donnerhall 9.2 for trot, 8.5 for canter, 9.0 for walk, 6.5 for submissiveness due to the made mistakes and the lack of concentration, and 9.5 for general impression. The total score was 8.54. Many people in audience starting booing and whistling at the judges and it kept on going for minutes; almost to the degree of embarrasment. Möller did not know how to respond to it. The judges vindicated their score by saying it was still a "high potential horse" despite him not being "on the job" today. The marks for the gaits and submissiveness were correct, but the 9.5 for general impression was far too high because of the mistakes. Sir Donnerhall found the silver lining, but it was a gift from the judges instead of an achievement. Let's take revenge at the Bundeschampionate.